Home ›
Dr. Marty Becker ›
How Do Show Cats Learn To Handle the Stress?

How Do Show Cats Learn To Handle the Stress? 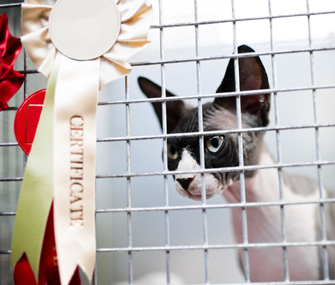 Q. I went to a cat show recently, and all the cats seemed very calm. My cat would be going crazy! How do these cats' owners train them to handle the stress?

A. Most animals who are shown — including cats, dogs, horses, sheep and other livestock, as well as canaries and even pet skunks — are prepared for their “careers” from a very young age. They are handled regularly by many different people, bathed and groomed frequently, and taught how to behave in (or at least tolerate) a showlike environment. Animals who aren’t temperamentally capable of handling the show life are generally retired from competition early, if they’re ever entered at all after their training at home.

Cats might seem among the most unlikely animals to accept the rigors of being shown. But many, if not most, cats are capable of a lot more than we ask of them. Consider the cool cats who are trained for roles in TV shows and commercials, or even the more common role of blood donor in veterinary hospitals. On my recent book tour for Your Cat: The Owner’s Manual, I needed an adult cat on short notice for a TV appearance, and the VCA Sacramento Veterinary Referral Center brought out a young cat named Donner. He’d been saved from a nearby shelter for work as a blood donor. Donor pets typically live in a veterinary environment for up to a year before their excellent temperament earns them a forever retirement home.

Donner may not have been a show cat, but he was showbiz all the way, lounging in the green room of Good Day Sacramento like a seasoned professional.

A Relaxed Demeanor Can Be Taught

Naturally relaxed cats like Donner are sometimes born, but they’re more often made. Breeders of pedigreed cats start preparing their future stars by getting them used to being held and handled as kittens. They encourage their “stance” for show by playing with them and rewarding them for standing or sitting more or less still. Show cats aren’t trotted around a ring like show dogs: The judge handles them one at a time on a comfortable, secure table, often helping them to relax and show their personalities by playing with them with a wand or feather.