Home ›
Dr. Marty Becker ›
My Dog Has a Gay Tail. What Does This Mean?

My Dog Has a Gay Tail. What Does This Mean? 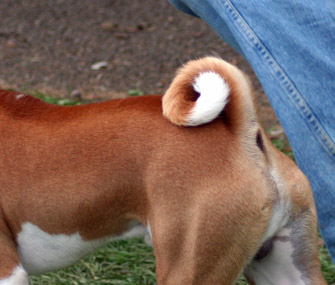 Q. At the dog park, someone said my dog had a “gay tail.” I didn’t want to let on that I didn’t know what she meant, so I just nodded. Can you tell me? He’s neutered, by the way.

A. The world of animals is full of interesting — and very old — terms that describe the way certain animals look. You ran into someone with a fair amount of canine knowledge, I’d say, possibly someone who has shown her dogs.

The term “gay tail” has nothing to do with your dog’s gender or sexuality, or if he’s neutered or not. It’s “gay” in the sense of “happy,” and it refers to a tail that’s flying high when the dog is alert and engaged, such as when he’s playing at the dog park. Specifically, it refers to a tail that’s set a little higher at the point where it connects to the body, allowing the dog to carry it above the topline. If you follow the back, in other words, the tail’s angle departs from the flat line and goes uphill.

In some breeds, a gay tail is considered undesirable in the show ring. If you imagine a Pointer,for example, the line of the back should be continued through the tail, to make the “bird here” point even more obvious. A perfect example can be found in the logo of the prestigious Westminster Kennel Club, which is a stylized picture of a Pointer named Sensation.

In other breeds, carrying the tail high like a flag (and even curled forward, such as in the Finnish Spitz) is either preferred or of little importance either way.

As a veterinarian, of course, I don’t give much concern to how high a dog's tail is carried, or even if he has much of one at all. As long as it’s wagging, I’m happy. And you should be, too.