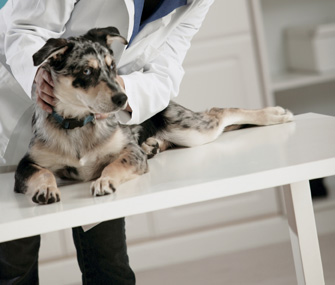 As a veteran veterinarian with more than three decades of practice under my belt, it has been a long time since I’ve been anything other than matter-of-fact about any medical procedure. I believe in “sharpening my saw,” as Stephen Covey advised in his classic bookThe Seven Habits of Highly Effective People, and that means I work to keep myself on the cutting edge of veterinary medicine.

But recently I found myself in a situation with no cutting edge at all. I was in training for a new neutering technique, one that has the potential to revolutionize how we care for our dogs. I had been looking forward to the training for weeks, but I have to admit there was just a split second of hesitation as I slid a needle into the testicles of the dog before me.

My microsecond of manly hesitation was immediately overwhelmed by enthusiasm. I had just “Zeutered” my first pet, and I knew for myself the ease of the procedure — and the potential Zeuterin has to be a powerful weapon in the fight against pet overpopulation.

A Shot of Good News

Zeuterin is a nonsurgical form of neutering, the only such procedure approved for dogs 3 to 10 months of age by the U.S. Food and Drug Administration. Neutering by needle works by injecting a solution of zinc gluconate into each testicle, rendering it incapable of producing sperm. The procedure is very close to pain-free (most pets probably feel nothing more than the needle stick) and usually does not require anesthesia. Zinc is a natural spermicide, and the injection allows the product to render the dog infertile. Even as the sperm are dying, the dog’s body is responding by blocking the tubes that carry sperm with scar tissue, while absorbing and metabolizing the solution. The solution will soon be gone, but the effect is permanent.

Zeuterin is ideal for animal shelters and spay-neuter clinics, with dogs usually in and out within about half an hour. (It's only for male dogs at this time.) From the pet's point of view, it’s probably an easy procedure, like a vaccination, really. The fur doesn’t even need to be clipped. For some dogs, a light sedation may be necessary, but others just need to be restrained. Complications are few, and those that do happen are mostly minor and short-term. A study of 40 dogs has shown no long-term complications for more than two years.

Because the chemical leaves the testicles in place — although they typically shrink in size — dogs who’ve been Zeutered will be tattooed with a “Z” or microchipped. Really, though, after Zeutering, the testicles will have a different "feel" to them that a veterinarian should be able to discern once trained.

Add it all up, and you can see why I chose Zeuterin as one of my top veterinary products for last year. And its potential is just starting to be realized. Zeuterin has been used in Japan to control dog populations in the area abandoned after the 2011 earthquake and tsunami, as well as to control populations of feral dogs in the Philippines. Humane population control of dogs in these situations is also a matter of public health, protecting people from injury and disease.