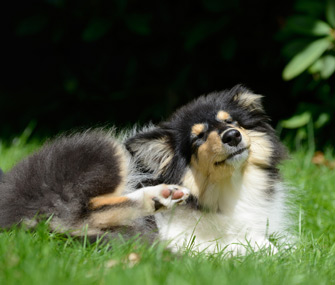 iStockphoto
Itching, hair loss and inflammation are the typical signs of scabies in dogs and cats.

Scratch, scratch, scratch. It drives us crazy when our pets are itchy, doesn’t it? It’s not just that the sound is annoying but that we know they must be miserable. There’s not much worse than an itch you can’t, well, scratch.

One of the possible causes of itchiness in pets is a skin condition called scabies, a type of mange. It affects both dogs and cats, but different mites are the culprits.

In dogs, the Sarcoptes scabiei mite burrows into the skin to lay eggs. Yuck! These highly contagious mites are found worldwide, but in the United States, they are seen most often in areas with high populations of foxes and coyotes, according to my colleague William H. Miller, VMD, a veterinary dermatology expert at Cornell’s College of Veterinary Medicine. Infestation occurs when a dog comes into contact with the den of an infested fox, for instance. Scabies also spreads easily in crowded conditions, such as animal shelters or pet stores.

Scabies is less common in cats, but contact with an infested feline can turn them into hosts for a mite called Notoedres cati, which also burrows beneath the skin. Cats are susceptible as well to the mite that causes canine scabies, picking them up from infested dogs, which just doesn’t seem fair. But, thankfully, this kind of infestation is uncommon.

Sarcoptic mange mites can also spread to humans — well, sort of. According to the Centers for Disease Control, canine or feline scabies mites can get under human skin, causing temporary itching and skin irritation, but this lasts for only a couple of days, because those mites usually can’t survive long on humans. Don’t feel superior, though. Humans are susceptible to their own mite infestations by Sarcoptes scabiei var. hominis.

The canine and feline mites have similar life cycles. They live 17 to 21 days, spending all of their time on the infested animal. After exposure to a mite-infested animal (direct transmission) or bedding (indirect transmission), it can take 10 days to eight weeks for signs to appear. The length of this incubation period depends on such factors as the number of mites transmitted and the individual animal’s health.