Home ›
Dr. Marty Becker ›
Should You Get a Designer Dog?

Should You Get a Designer Dog? 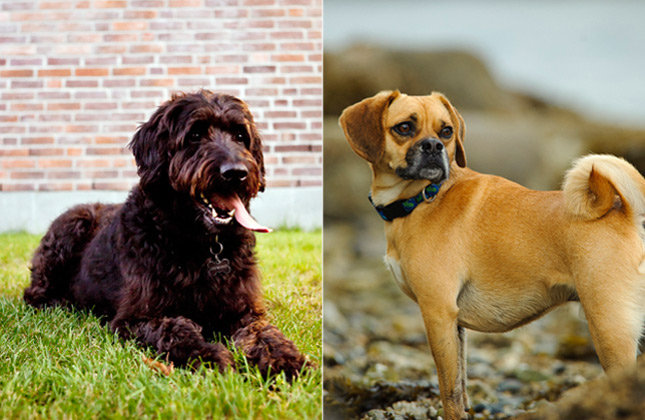 When I was growing up, we lovingly called mixed-breed dogs “mutts” or “Heinz 57s.” Just about everybody had one, and they usually came for free (or at least not very much) from the neighbor’s litter or the local pound. Nowadays, these pooches are ofter referred to as "designer dogs" — and they cost as much as a boatload of dog biscuits and bear creative monikers like Puggle (Pug and Beagle cross), Labradoodle (Labrador and Poodle cross) or Goldador (Golden Retriever and Labrador Retriever cross). I love all dogs, and three of my own furry friends fall into the “What is that?” category: Quora is a blend of Pomeranian, Shar-Pei and Cairn Terrier; Amazing Gracie is a Lab/Pit Bull mix and Quixote is a canine cocktail. They are each one-of-a-kind dogs, and to me they are priceless.

Busting Some Myths About Designer Dogs

Many people ask me about getting a designer dog, also known as a hybrid or a crossbreed. Usually it’s because they have allergies, and they’ve heard that designer dogs don’t shed or are hypoallergenic. Another common belief is that designer dogs have fewer health problems or will combine the best qualities of each of their parents. While it would be great if that were the case, it doesn’t always work out that way.

When two dogs mate, each parent contributes half of the genes that determine a puppy’s characteristics, but the selection is random. There’s no guarantee, for instance, that a Puggle will have a Beagle’s cute face and a Pug’s laid-back personality. He could have a Pug’s short face and breathing problems, and a Beagle’s desire to roam and howl.

Crossing two different breeds doesn’t necessarily diminish the risk of health problems, either. In fact, crossbreeding can introduce health problems into the mix, or intensify problems such as hip dysplasia or eye disease that two breeds might share. We know from health registry statistics that Labradoodles have a higher percentage of poor hips than Labradors or Poodles alone, for example.

And not all hybrids come with an easy-care or low-shedding coat. That cute Puggle is the offspring of two breeds known for being what I like to call hairy hand grenades. The facial wrinkles that give him such a serious expression must be cleaned regularly to prevent infection. A Cockapoo’s coat might have the tight curls of his Poodle parent, or the straight or wavy hair of his Cocker half. Either way, he’ll need professional grooming every four to six weeks to look his best.

The fact is, dogs are individuals. Even dogs within particular breeds vary in the amount of dander they produce (which is what affects how likely they are to set you off sneezing), as well as how healthy they are or what type of coat they’ll have. Crossing two breeds doesn't eliminate any of these issues, and in some cases, might make them worse.

What to Look for in a Designer Dog

I’m not going to say you shouldn’t get a designer dog, but I do believe you should be just as stringent in your search for one as you would be if you were buying a purebred puppy. After all, if you’re going to pay $1,000 or more for a dog, you should get your money's worth.

Designer dog breeders who are serious about their crosses perform the same health certification tests as those done by reputable breeders of purebred dogs, and those are the ones you should buy from. If you are allergic to dogs, visit breeders or other people who have the breed or cross you’re interested in to see if you can tolerate the dog before buying.

And if you really want a dog that’s one-of-a-kind, visit your local shelter and come home with your very own tan-coated Palm Springer, Arizona desert hound or North American painted dog. Nobody else is going to have one of those.