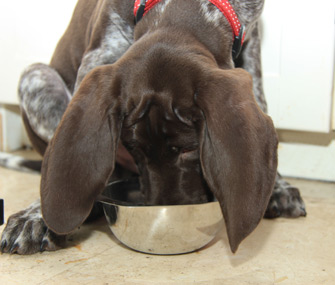 Thinkstock
Establish a regular mealtime for your puppy, as it gives him something to look forward to every day.


Feeding your puppy does more than help him grow — it’s a way of bonding, and it gets him on a schedule that makes it easier for you to house-train him. Start with the food the breeder or shelter has been giving him. If you want to change it, gradually mix in the new food over a week to 10 days to limit tummy upset.

I don’t recommend free-feeding dogs — leaving food down all the time — at any point in their lives. A regular mealtime gives your dog something to look forward to, helps prevent obesity and ensures that you know if he is starting to eat less or becoming ravenous, both of which can indicate health problems. Consider hand-feeding your puppy for at least the first week he is with you. Just as you would if you were feeding him from a bowl, measure his food, so you don’t give too much. Give him pieces of kibble from your hand as long as he is sitting still or looking at you. Don’t reward him for jumping up, barking or doing anything else you don’t like. Feed him in different areas of the house.

If you walk away with the bowl and he follows you, give him some more. Sit in a chair or stand in the kitchen. Pretty soon, you can start asking him to do things, such as sit, down or spin for kibble rewards. This shouldn’t take more than a few minutes per meal, and any family member can do it.

The longer you hand-feed, the better. This will help your puppy to develop a soft mouth, so he doesn’t nip or bite when he takes things from your hands. It teaches trust and self-control. It helps him learn not to wolf down his food. And it creates a dog who will likely be crazy easy to train, because he will be so focused on you.

Your puppy's socialization continues through the night — even though you’re both asleep. You may plan to let your pup sleep on the bed, but right now he’s still too young to be allowed that privilege. When it’s bedtime, take him out for one last pee and then matter-of-factly put him in his crate with a treat and his towel that smells like Mom. Don’t respond to whining or barking. Tell him good night and go to bed yourself. He’ll soon settle down, and your scent and the sound of your breathing will help to calm him.

Depending on his age, he might not be able to last through the night without another potty outing. If you hear whining or scratching at the crate door late at night, hustle him outdoors, so he can do his business, and then bring him right back in to his crate. You don’t want him to get the idea that you’ll play with him in the middle of the night.

You most likely bought a few toys before bringing your new pup home. Now that you’ve observed him for a couple of days, you probably have a better idea of how he likes to play and what types of toys intrigue him. If he’s a big pup who likes to chew, make sure his toys are tough. They shouldn’t have any pieces that he can chew off and swallow or any stuffing that can come out if he rips the toy apart.

Some pups are gobblers. They rapidly bite off and swallow pieces of rawhide or anything else they can chew up. Avoid giving them anything like that and stick to large, tough rubber items, such as balls that they can’t take a bite out of.

I’m a big fan of puzzle toys, too. Put food or treats inside and watch your puppy go to work trying to figure out how to get at them.