Home ›
Dr. Marty Becker ›
What Life Is Like With a Cat Who Isn't Fixed

What Life Is Like With a Cat Who Isn't Fixed 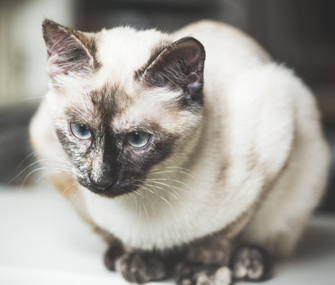 Thinkstock
Your veterinarian can tell you the best time to spay or neuter your individual cat. Siamese cats, for example, are known for early sexual maturity.

Have you ever heard the yowling of a female cat in heat or the screams of two males fighting over a female? Believe me, heavy metal bands got nothin’ on them. Neither noise is anything you want to listen to for very long.

Living with an intact cat — male or female — is not an especially pleasant experience. Intact cats of both sexes are serious about territory, status and sex. Under the influence of their hormones, they roam and fight (especially males). Thanks to their teeth and claws, they are perfectly capable of maiming or killing one another. Keeping intact cats of the same sex together or letting intact cats of either sex roam outdoors is almost a guarantee of frequent and expensive vet bills. They can disappear for days in search of a mate and may come home with bite abscesses and other wounds from fights. They are also more likely to contract and spread diseases, such as feline leukemia virus and feline immunodeficiency virus.

Intact males are at greater risk for testicular cancer and prostate disease. Intact females have a higher risk of mammary and uterine cancer and serious uterine infections. Intact females who are allowed to roam will often fight with other females, and they incur the same risk of injury and disease as males. And, of course, having a litter is risky for females, especially if they are still no more than kittens themselves.

In my opinion, there’s no good reason to delay spaying or neutering your cat, unless you have a fine-quality pedigreed cat whose genes would contribute to the betterment of the breed. But, if you are considering doing so, there are a few important things you need to know about living with an intact feline.


Age and Time of Sexual Maturity

Cats also generally achieve a minimum body weight before puberty kicks in. It’s usually around five to six pounds for females and seven to eight pounds for males. Males can perform throughout the year if there’s a receptive female in reach.

Beyond age and weight, the amount of daylight available is one of the factors affecting when cats go into heat. The long days of spring and summer jump-start the hormonal system and put the reproductive cycle into play.

The typical “kitten season” in North America can range from February to October. During this period, females may go into heat more than once. Cycles vary from cat to cat.


Intact male cats, commonly known as studs or toms, are all about territory. When your male cat reaches sexual maturity, he’s likely to start spraying your home and yard with stinky urine to establish his turf and ward off strange males. In rare instances, males don’t spray, but most will start sooner rather than later if they remain intact. Once the behavior is established, it’s difficult to eliminate, although neutering may help.

Breeders who keep stud cats typically have a separate indoor or outdoor run for them, so they don’t destroy furnishings or harass other cats in the home. A stud run should have plenty of vertical and horizontal space, and an outdoor run needs adequate shelter. In addition, the litterbox area must be far away from the cat’s food and water dishes.