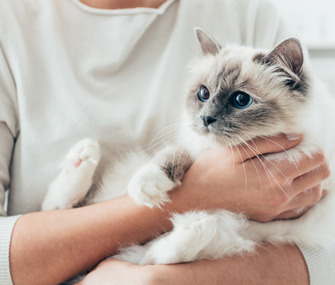 Thinkstock
Being picked up is not a natural behavior for cats. Cats don't pick up other cats to show affection.

Veterinarians get a lot of questions about pets, and not all of them are about health. Often, pet owners ask about seemingly random behaviors. Cat lovers, in particular, typically want to get a better handle on their felines — sometimes literally: They want to know why their particular cat doesn’t enjoy being held.

We’ve all experienced the squirming cat at one time or another. You pick him up, and instantly you have an armful of furry whirling wrath as he attempts to get four on the floor. What’s his problem? I have some thoughts of my own about why cats resist cuddling, and I asked my colleague Dr. Wailani Sung, a board-certified veterinary behaviorist, to weigh in as well.

Why Your Cat Won't Cuddle

Most cats enjoy being up high because they have a better view of their territory, but in many cases they want to achieve those heights on their own terms. It’s one thing for a cat to jump up on the kitchen counter or a bookcase, but being held by a person may seem demeaning to one who is a relative — albeit a tiny one — of the king of beasts. If your cat doesn’t enjoy being held, it may be because he just feels disrespected when you scoop him up.

Other cats may have a related reason for resisting restraint — and, let’s face it, being picked up and held is a form of restraint, even if it’s meant lovingly. Dr. Sung says some cats have had negative experiences with being restrained. “This could be associated with being physically restrained for vaccinations, having their temperature taken or having their nails trimmed,” she says. “There are still some clinics that scruff cats and kittens for any veterinary procedure. It takes only one to two mildly negative experiences to teach a cat to be wary.”