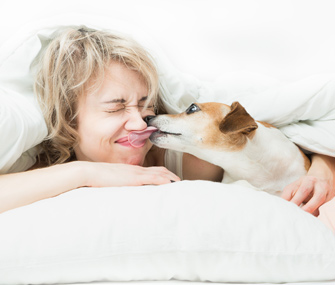 iStockphoto
Don't be offended if your dog doesn't lick you. He may prefer to show his affection in other ways.

Dog owners either love or hate the slurpy greeting delivered by a dog’s tongue. Dogs wash our faces, French kiss us and bathe our feet. How much we enjoy their ministrations often depends on whether we’ve just noticed them licking their groin or the bottoms of their paws before turning their attention to us.

Many dogs love to lick us as well as themselves. Their reasons for doing so range from mundane to medical. Here’s what you might not know about why dogs lick — and why they might not.

The Lick of Love

We are large bodies of salty goodness. Dogs may enjoy the taste of our skin, especially if we’ve been perspiring or have deliciously stinky feet.

Even better, they get attention from us when they lick us. They especially love good attention, like a giggle as their tongue tickles our toes, but they’re also okay with us swiping a hand across our mouths and saying “Yuck!” After all, we’re still talking to them. It doesn’t matter all that much what we say, as long as it’s in a loving tone.

Dogs may lick us to let us know they love and respect us — and by the way, could we drop a little treat in their direction? Just as wolf pups lick their mother’s muzzle to get her to feed them — with yummy regurgitated food — dogs lick us to express their admiration and maybe get a reward in turn. One intangible reward they receive from their licks is a physiological turn-on — the release of feel-good hormones called endorphins.

In other instances, dogs who lick frequently for no apparent reason may be suffering a gastrointestinal problem. They may lick their bowl frantically, even though it’s empty, or lick carpet or upholstery after eating. A closer look at their health may reap a diagnosis of inflammatory bowel disease or some other type of GI disease.

Even though licking is usually a completely normal canine behavior, it doesn’t mean your dog is weird if he doesn’t lick you. It also doesn’t mean that he doesn’t love or respect you. Your dog may have had a mother who didn’t lick much herself so he never picked up the behavior. He may have been trained as a pup not to lick — by someone who’s a better trainer than I am — or he may simply have other ways he prefers to use to communicate with you or show you affection. If your dog isn't a licker, don't fret — just enjoy your saliva-free life!