Why Veterinarians and Trainers Alike Love Crates for House-Training Puppies 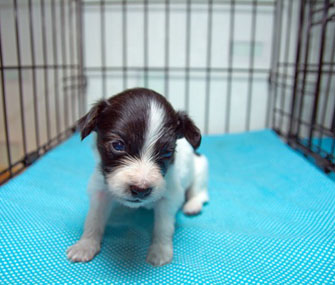 Q. We took our puppy to a class at the pet store, and the instructor urged everyone to use a crate for house-training. Is it really fair or kind to keep a puppy in a cage?

A. Old ideas can be hard to eradicate, even when better ones come along. That's certainly true when it comes to house-training, with some people still using pointless, long-discredited methods such as shoving a puppy's nose in his mess or swatting him with a rolled-up newspaper.

Using a crate to raise a puppy is the kindest and fairest method of all, because it provides a puppy with a lesson for life. Not only does a puppy learn when to and where not to relieve himself, but he also grows up feeling relaxed, safe and secure in confinement.

Though the first lesson is for puppies, the second is forever.

Dogs who are comfortable in crates can be more safely transported, and they are generally more relaxed if they have to stay at the veterinarian’s. Finally, crates provide pets with safe, secure housing in an emergency, such as during a natural disaster.

Bottom line: The expanded use of crates, once just for shipping by air, has been one of more significant advances in modern dog training and care.

Most dogs learn quickly that a crate is “a room of his own,” and as long as the pet isn’t left crated for extended periods of time, the crate is a tool that really and truly works well for all.

So how does a crate “magically” house-train a puppy?

Crate-training limits a puppy's options to three: He's either empty and playing in the house, he's in the crate and "holding it" because he doesn't want to sit in his own waste, or he's at the place you've chosen for him to relieve himself. A key to successful crate-training is to purchase a crate that's large enough to allow the puppy to turn around, but not so roomy that he can do his business in one corner and take a nap in the other.

It's also important that puppies are not left in their crates for extended periods of time. Puppies need to relieve themselves after they wake up, after they eat or drink, or after a period of play. Set up a schedule to accommodate his needs as you work to mold behavior; young puppies, especially small breeds or mixes, can't go very long without eating, drinking, sleeping or relieving themselves.

A good rule of thumb: Puppies can hold it as long as their age in months. A 2-month-old pup can hold it in a crate for about two hours, for example.

When the puppy walks into the crate, praise him and give him a toy or treat. But don’t make a huge fuss over his walking in — be calm and matter-of-fact about it. Your puppy should associate positive experiences with the crate, so he comes to think of it as a natural place to relax.

Let the puppy sleep next to your bed in his crate — sleeping near you speeds the bonding process. When he's young, he may wake you in the night to let you know he needs to go outside. But as he grows older, he should be able to make it through the night. Then, as soon as he's awake in the morning, lead him to the chosen outside spot. When he goes, praise him thoroughly. Then take him inside for breakfast. Feed him and offer him water, and then take him out for another chance to go. If he goes, more praise and back inside for play. Once he's completely empty, put him in the crate. Ignore the whines and whimpers. If left alone, the puppy will soon be fast asleep and will stay that way until it's time for the next round of out, eat/drink, out, play, crate.

Remember, the goal is for your puppy to become reliable enough to roam free in your house, not to stay in a crate for life. Dog trainer and author Liz Palika sums this up nicely: "A crate is not a storage container for a dog." I agree.

Eventually, your pet will spend more of his time loose in the house under your supervision, and he will start asking to visit his outdoor spot. Don't forget to confirm his early attempts at proper behavior by rewarding him with praise and treats.

If you spot an in-house accident, don't punish your pet. Rubbing his nose in the mess is pointless and mean. If you catch your dog in the act, a stern "no" will suffice, followed by an immediate trip to the yard and praise when he finishes up where he's supposed to. Clean up the inside mess thoroughly, treating the area with an enzymatic solution to neutralize the smell.

With proper crate-training, the number of such incidents will be relatively few, and you'll end up with a dog who is not only reliable in the house, but also confident in his own ability to stay alone when you are gone.

Doesn’t sound the least bit unfair or unkind to me.