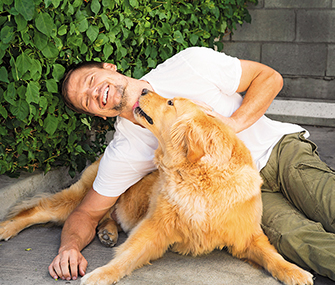 Look beyond that slick Stetson and the stern brow of Deputy Branch Connally, one of the main characters of the modern Western Longmire, and you’ll find the lean and often smiling face of Bailey Chase, actor and dog lover. This star is known for his gripping portrayals of Sean Everett in Damages and the confident detective Butch Ada on Saving Grace with Holly Hunter. Recently he’s also starred in the soon-to-be-released short film Kadence and the feature film No Beast So Fierce.

But before his success, it was a yellow Labrador Retriever named Gauge who served as his faithful canine companion. After graduating from Duke University in 1995 with a degree in psychology and wrapping up a successful college football career, Bailey took a leap of faith and moved with Gauge to Los Angeles. Initially he scored roles in television commercials and soap operas, but he was looking for something more. So he sought experience at the London Academy of Music and Dramatic Art before returning to Los Angeles and making his film debut in the film short “Cosmo’s Tale.” The film was screened at the Sundance and Cannes film festivals, and it wasn’t long before Bailey landed his role as the calm, collected Graham Miller in the hit television show Buffy the Vampire Slayer.

A lifelong dog lover and Western fan who idolized Clint Eastwood as a child, Bailey feels right at home donning a cowboy hat as his Longmire character Branch Connally and navigating the politics of bringing Absaroka County into the 21st century. 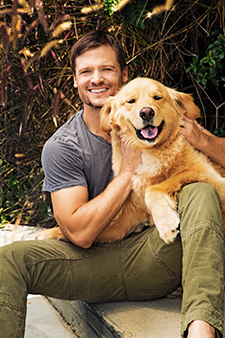 When Bailey’s not on set, you might find him hiking or spending time with his family. It was on just such a hike that Bailey’s life changed forever, thanks to the matchmaking efforts of his beloved pooch, Gauge. Bailey and Gauge were hiking in Runyon Canyon Park, a 160-acre recreation area at the eastern edge of the Santa Monica Mountains in Los Angeles. Also hiking on the trail that afternoon: the woman Bailey would marry, Amy Wilson. Amy noticed Gauge and bent over to pet him, and Bailey struck up a conversation with the stranger. From that chance meeting over a friendly Labrador, the duo’s romance blossomed.

Sadly, Bailey’s close canine companion was 14 years old and well into his senior years by this point. Not long after he helped Bailey meet the love of his life, Gauge began to decline in health. In the last year of his pooch’s life, Bailey worked closely with his veterinarian to manage Gauge’s ups and downs.

When Gauge’s bad days outnumbered the good ones, Bailey, with a heavy heart, made the choice to schedule a euthanasia appointment. And on their last night together, Bailey noticed that his buddy Gauge seemed more tired than usual.

“Normally when I got home, he would like to get up on the couch with me, and he just didn’t have the energy to do it,” Bailey says. “And so I got on the floor with him, and we were just hanging out that night. I knew the next morning I was supposed to take him in. And I fell asleep. We slept on the floor together that night. And when I woke up the next morning, he was gone.”

Bailey took Gauge’s body to the crematorium and brought the ashes home. He kept the jeans and sweatshirt he’d worn on his last night with Gauge in his closet, refusing to wash them.

View Next Article: Help Your Pet Transition From Adult to Senior