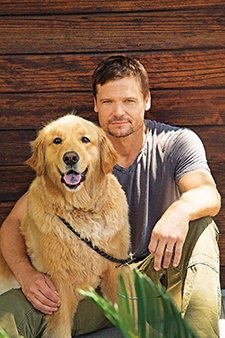 Charles Bush
"I think dogs are truly man's best friend, and you get back what you give to them a thousandfold."

Next Bailey called his dad and brother and invited them to join him at El Matador, a beach in Malibu where Bailey and Gauge had spent many happy times romping in the surf together. There, surrounded by family, Bailey held a ceremony for Gauge and said a prayer as the sun set.

“Years later, I took the sweatshirt out of the closet and I took my wife there — my girlfriend at the time,” Bailey says. “I took her to where I held Gauge’s ceremony at sunset. And then I told her the story of Gauge. And it was a bit cooler as the sun was setting. So she put the sweatshirt on, and I asked her to marry me. She said yes. We cried together.” A year later, Bailey and Amy married.

A Gift For Service

Today Bailey shares his life with his wife, Amy; their young daughter; and their new canine companion, Blue. Blue, a Golden Retriever, is a certified therapy dog, a passion Bailey pursued both because Blue had the perfect temperament and because the actor knew from experience the value of therapy dogs.

Bailey had attended Duke University on a full football scholarship. But when he was off the field, you’d often find him volunteering with his fellow football players at the local children’s hospital. “We would go there, and the kids would just light up. And then we would light up,” he says.

Later, Bailey’s grandmother went into a nursing home. And as he thought about the nursing home environment and how to make it nicer, Bailey formulated a kernel of an idea that would later lead to Blue’s certification.

“For retrievers, I feel like service is in their DNA. They’ve been service animals for so long they just take right to it. They’re great with people. They’re great with kids,” Bailey says. “I feel like Blue’s happier when he’s working, and he just makes people feel better. When I got him, he had the right disposition, and it felt right. It’s something we can do on our downtime to brighten people’s days.” 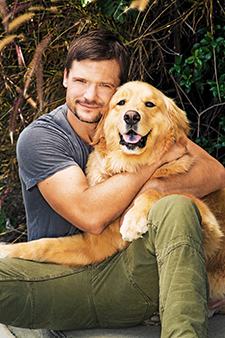 In addition to his role as a therapy dog, Blue serves as canine big brother and protector of Bailey and Amy’s tiny new addition— their young daughter, Waverly, who was born in the summer of 2014.

“I think dogs are truly man’s best friend, and you get back what you give to them a thousandfold,” Bailey says. “Since my daughter was born, Blue still looks to me, but he’s also watching after her.”

This article originally appeared in the Fall 2015 issue of HealthyPet magazine.

View Next Article: Help Your Pet Transition From Adult to Senior