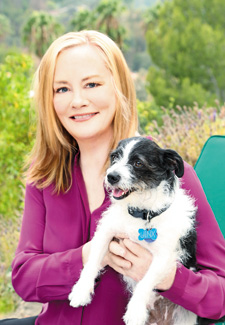 Charles Bush
For the past year, Cybill Shepherd has shared her life with two rescue pups.

Whether you fell in love with Cybill in her stunning film roles as Jacy Farrow in The Last Picture Show or Betsy in Taxi Driver or as the glamorous gumshoe Maddie Hayes on the hit TV show Moonlighting, you’ll love her even more once you know the depth of her passion for pets. Cybill tore up the small screen with her dashing partner David Addison Jr., played by Bruce Willis, as the two fought crime and solved mysteries at the Blue Moon Detective Agency. The series netted Cybill two Golden Globe Awards and was listed as one of Time magazine’s “100 Best TV Shows of All Time” in 2007. Cybill later earned another Golden Globe for her performance in the TV series Cybill. But it’s her amazing connection with animals that makes her a true leading lady for the cause of animal rescue.

Of Horses and Dogs

Cybill’s first dog was a sweet little English Springer Spaniel named Freckles. She describes the precious pooch as the love of her life when she was 9 years old. One awful day, Freckles was hit by a car. A close family friend was a veterinarian, and he came and got Freckles, who passed away. Cybill remembers sitting on the bed next to her brother and sister and sobbing. She still keeps a statue of a dog that resembles Freckles in her home to remind her of her departed canine companion.

For a long time afterward, Cybill didn’t have any dogs. “I think the loss of Freckles was so deep that I just couldn’t imagine taking that risk of being so close and losing another pet,” she says. So Cybill turned her passion for pets toward horses, forming close connections with horses in her youth.

Cybill learned to ride in Germantown, near Memphis — the same area, she says, where equestrian Melanie Smith Taylor practiced. At the 1984 Summer Olympics in Los Angeles, Taylor would ride her horse Calypso to help clinch team gold for the United States.

Cybill’s next pets were her mother’s two white Poodles: Dolly, a Miniature named for the musical Hello, Dolly!, and Tassie. “And I got to clean up because they were never really housebroken and we had white wall-to-wall carpet, so that was my job,” Cybill says.

Teaching On and Off the Furniture