Morgan Fairchild Would Save All the Animals If She Could 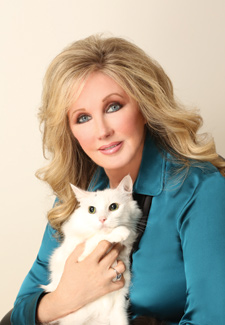 When you meet Morgan Fairchild, the first impression of this Emmy– and Golden Globe–nominated actress is one of generosity, humility and kindness. The ever glamorous and always youthful actress got her start on the soap opera Search for Tomorrow. After appearing on Dallas, Flamingo Road and Paper Dolls, she landed the part of attorney Jordan Roberts on Falcon Crest. Since then, she’s played recurring roles on Mork & Mindy and Roseanne, returned to soap operas, starred in theater productions, portrayed memorable moms on both Chuck and Friends and entertained us in her guest roles in sitcoms like Happy Days, Two and a Half Men, and Hot in Cleveland. Now, the talented actress is starring in Wiener Dog Internationals, alongside Jason London and a slew of adorable Dachshunds. Read on to learn about the animals who hold a special place in her heart.

Growing up in Texas, Morgan Fairchild doesn’t remember a time when her family didn’t have animals. They had Dachshunds when she was little, then a cat. Morgan remembers visiting her first-grade teacher’s farm in Oklahoma and bringing home a yellow tabby kitten (with her parents’ approval, of course). Morgan was in charge of taking care of the cat, which came naturally to her. “I was always a ‘little old lady’ kid,” she says, “very responsible.”

She only had to wait a few more years before her next furry companion arrived. “When I was in the sixth grade, I got it in my head I just had to have a Poodle,” she says. “Every Sunday, I would get the classifieds and mark little Toy Poodles and try to convince my dad we could afford one.” She finally got her father to visit a breeder. The whole drive there, he kept repeating, “We’re not getting a dog.”

When they arrived at the house, one puppy ran out of the kitchen and jumped in her father’s lap. He was sold. “The puppy knew exactly which one of us to go to,” says Morgan.

Dogs and Cats in the City

When Morgan moved to New York, she left behind two Pomapoos who were part of a litter from that Toy Poodle and a neighbor’s Pomeranian. Even though they were Morgan’s dogs, they were seniors by then, and her parents had grown quite attached to them. So Morgan decided it was best if the dogs stayed in her childhood home.

In New York, Morgan often took care of her sister’s Afghan Hound while Cathryn was attending Juilliard. Morgan remembers one day when she was walking the dog in Riverside Park, and she had to get to work on the soap opera, Search for Tomorrow, but the hound wasn’t cooperating. “He sat down on the ice and wouldn’t budge,” she says. “Some old lady walked by and hit me with her pocketbook and said, ‘Leave that dog alone!’ I was just trying to get the dog home so I could go to work.”

Shortly after that, Morgan started adopting cats. She explains that cats were a little easier than dogs to manage in New York. “You don’t have to walk cats in ice and snow,” she says with a grin. Between her sister and her, they had three cats: a Himalayan (Galadrial [Gilly]), a deaf white Persian (Nijinsky), and a Siamese (Michelli [Mick], who was technically Cathryn’s cat, but Morgan cared for him while her sister was on the road).

They all had very different personalities. The Persian was an extremely sweet, easygoing cat and the last addition to the family, so Morgan paid particular attention to ensure he wasn’t bullied by the other cats. The Siamese, on the other hand, was extremely vocal and could be demanding. “I woke up one morning with him hanging from my nose by his teeth,” she says. “It was not a good way to wake up.”

A Soft Spot for Pets Who Need a Home

When people are moving or can no longer take care of a pet, Morgan is often the one her friends and acquaintances turn to for help. One of her girlfriends called because an older lady she knew was having her grandson move in, and because he was allergic to cats, the woman needed to rehome a 6-year-old Himalayan, Miggles. So Morgan took the cat in.

Another time, clients of Morgan’s acting coach were moving to the East Coast and needed to find a new home for one of their cats. Morgan told them to bring the cat to her house to see if he got along with her other cats. “When they opened the cage, this cat just kept coming out — more and more cat,” she remembers. He did get along with the rest of the household cats, and Morgan couldn’t resist him, because this sizeable cat also lived up to his name, Mr. Snuggles.

Unfortunately, both cats died when she was on tour with the stage adaptation of The Graduate. The Himalayan died of natural causes, and Mr. Snuggles died suddenly, after being diagnosed with cancer. Morgan worried that her boyfriend, Mark, would be lonely because he was close to the cats, especially Mr. Snuggles.

When she was home on her next break from tour a few months later, she walked by an adoption event for stray cats while she was out getting coffee. She says, “One cat reached out and snagged me, and I thought, ‘Oh, you’re adorable. Somebody’s going to love you.’” But then she noticed a tattered, skinny little cat huddled in the back. “I knew nobody would take him,” she says. The event organizers told her that black cats are hard to get adopted, and the cat who had snagged her earlier happened to be a black cat. She adopted them both. Morgan and Mark have shared their home with Little Guy and Mariah for about 11 years now.

1 2 Next ›
View Next Article: Something to Smile About: How to Improve Your Pet's Dental Health