Home ›
HealthyPet ›
Put a Stop to Your Cat's Clawing and Scratching

Put a Stop to Your Cat's Clawing and Scratching 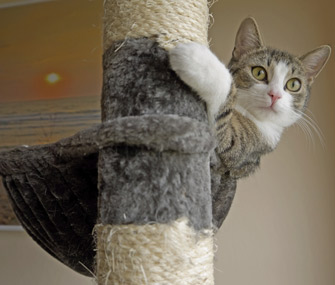 Thinkstock
Move scratching posts into areas where your kitty already hangs out and targets for scratching.

Are you sick of fuzzy couch legs and ratty carpets? Does your furry friend only occasionally visit scratching posts or avoid them completely? At the same time, your cat’s claws may seem to possess a near magnetic attraction to other surfaces in the home she deems claw-worthy.

As an animal trainer who works with veterinarians and veterinary behaviorists to address problem feline behaviors, I’ve found few other behaviors in the cat that are as misunderstood as scratching. When your cat scratches, your go-to response may be to nix the behavior using punishment. But punishment can create a snowball of problems. Your kitty may feel stressed and anxious from the unpredictability and negative association caused by punitive techniques. She may even withdraw socially or display defensive aggression or inappropriate urination after being punished.

Punishment rarely resolves the scratching. Instead, it may temporarily inhibit the behavior or your cat may choose to scratch out of sight. Frustration can even drive some cat owners to opt for declawing or surrendering the cat. Let’s examine alternatives to strike back at your cat’s problem scratching.

One reason cats scratch is to release energy and explore surfaces. Cats have innate desires to hunt and explore. When they lack better outlets, they may choose scratching and using claws to investigate items within your home and to release pent up mental and physical energy.

Cats of all ages can be serial scratchers.But clawing household items is especially pervasive in young cats or higher energy breeds that possess an overabundance of inquisitive and activity- seeking tendencies. The repetitive motion of scratching is an energy releaser, stress reducer, and may even feel good, as it simulates a yoga-like stretch to the joints. Your curious kitty may also use her claws to reach great heights. As she seeks a bird’s eye view she may cause damage, like scratching your new couch as she scales up the back.

Probably the No. 1 reason cats scratch is for communication. Scratching helps your kitty say to those sharing the space, “I was here.” When she scratches she also leaves behind chemical cues from scent glands in her paws. The smell of their own scent helps cats feel more secure. This is probably why cats that have been declawed continue to scratch. Cats tend to select a few conspicuous places indoors or out and go back to them repeatedly.

Cats may also appreciate the attention they receive for their work. Negative attention is still attention and welcomed by cats craving more human interaction.

Let’s face it — scratching is an innate behavior for cats. So rather than attempting to eliminate clawing, employ a better approach by preventing scratching in undesirable areas and encouraging the behavior in appropriate locations.

Your desire to keep your home and treasured items in good condition is an achievable goal. Best of all, you can redirect clawing to better outlets with non-confrontational techniques your cat will comply with. These steps may also help your cat feel calmer and improve his bond with the people in his life.

First, make designated scratching areas desirable. Where you place scratching posts matters. Location is a large reason some cats won’t use their posts. Is your post in an out-of-the-way room or basement? For your cat, these spaces hold little value for communicating with other animals and people.

Move the scratching posts into areas where your kitty already hangs out and targets for scratching. For example, the living room has high communication value because people and other animals regularly move through these areas. If there are specific objects like a couch your kitty scratches, move the post right in front of his old scratching place.

For multiple cat homes, you may need to add additional scratching posts. Some kitties will not be comfortable in areas patrolled by another cat. Ample scratching posts give opportunities for cats to find a space of their own to claw.

The more scratched up and marked the post, the better for most felines, who seek out their own previous smells and marks. While older scratching posts are less visually attractive to us, these familiar spaces are more attractive for cats.

View Next Article: Can't Take Your Best Friend on Your Trip?