10 Things You May Not Know About Frogs 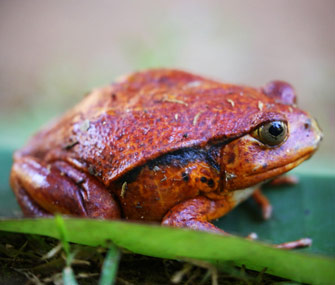 Thinkstock
The tomato frog is one of several frogs that secrete toxins from its skin as a defense mechanism.

Think you know a thing or two about frogs? You're about to learn a whole lot more, all in the name of National Frog Month!

We jumped at the chance to learn some little-known frog facts from Mark Schick, who is the collection manager at Shedd Aquarium, where he oversees much of what goes on with Shedd's new Amphibians exhibit.

From incredible athletic feats to some pretty amazing methods of surviving extreme temperatures, here are 10 facts about frogs we bet you didn't learn in high school biology.

1. When pursued, cricket frogs can jump really, really high. Like, 60 times the length of the body! Sure, that equates toonlyabout three feet, but think of it this way: That's thesame as a human jumping as high as a 38-story building.

2. The tomato frog comes by its name honestly. It puffs itself into a round shape, which looks a lot like a tomato, when it's threatened, at which time it also releases a milky poison from its skin. And that's not the only frog with dangerous skin — the blue-legged mantella frog also releases a toxin through its skin when threatened, as do the golden mantella frog, the green and black dart frog, and others. 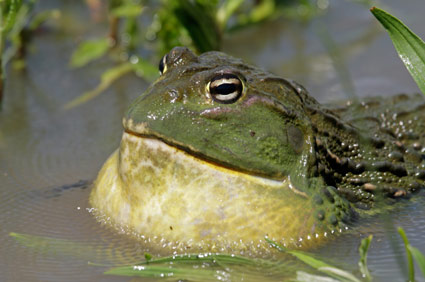 Thinkstock
The African bullfrog has been known to eat its own young.

4. Speaking of the African bullfrog, get this: African bullfrogs can bury themselves in underground burrows for months. This protects them during periods of extremely dry weather, when temperatures often reach over 100 degrees Fahrenheit during the day and dip below freezing at night.Once the rainy season begins, they come out and head for the shallow waters of temporary seasonal floodplains and puddles.

5. Green and black dart frogs work as a co-ed team when it comes to child care. The females lay clusters of up to 13 eggs in leaf litter, after which the males care for the eggs before carrying the hatchlings on their backs to small still-water sources in the trees.

6. One noise just isn't enough for the male southern leopard frog, which makes two distinct calls. The first resembles the squeak of a human finger on a balloon, while the other could be mistaken for a rapid chuckle.

7. Wood frogs don't mind the cold. Seriously. Up to a third of this frog's bodily fluids can safely freeze, allowing him to survive temperatures as low as 23 degrees Fahrenheit.

8. Wood frogs have a reputation for being “explosive breeders.” ​You might find thousands at a breeding pond over a period of a few hours. But don't worry if they're taking over your favorite swimming hole — they'll complete breeding by the time morning comes around​.

9. American​ ​​​bullfrogs are big in North America. ​No, really — they're the largest frogs on the continent, and the males' calls can be heard more than half a mile away.​

10. Not all frogs have webbed toes. The blue-legged mantella frog, for example, is one of several frogs that is terrestrial, so it doesn't have (or need) webbed toes for swimming.