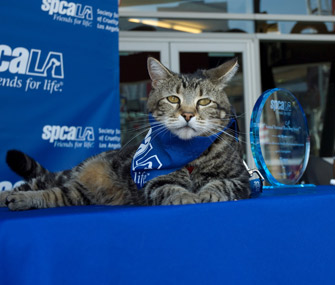 A Los Angeles animal shelter’s annual Hero Dog award was given to Tara the cat, who fought off a Chow-mix that attacked Jeremy, her 6-year-old owner, in the driveway of their home. Tara body-slammed the dog and chased it out of the driveway and away from Jeremy. Video of the incident caught by security cameras went viral and Tara became an internet star. But Roger Triantafilo says Tara is not an aggressive cat — she's just protective of Jeremy, who is autistic. “The neighbor kids come over and play with her. Dogs walk by all the time. She gets along fine with our dog, Maya,” says Jeremy’s father. “But if Jeremy falls off his bike, she comes running. If he starts crying, she comes running.” The trophy awarded to Tara for her heroic deed had one alteration — the word “dog” was scratched out and replaced with “cat.” — Read it at Wish TV