3 Ways Your Dog’s Nose Could Save Your Life 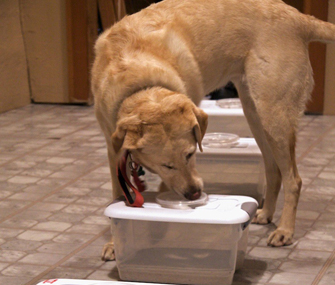 When news headlines trumpet a dog sniffing out trouble and saving someone’s life, there’s often a dramatic story to tell: a fire, an explosive or a search-and-rescue operation. But there’s another remarkable way that dogs’ highly attuned sense of smell can save lives.

By following their noses, some canines can alert you to life-threatening health issues.

While there are thousands of first-person anecdotes about such scenarios, there’s also a growing body of scientific evidence and corroborating studies. Researchers across the world are investigating the potential of using dogs as medical early warning systems. With their heightened sense of smell — thousands of times more sensitive than humans' — it seems that canines can pick up the scent of certain diseases and medical conditions.

Could your dog give you a crucial early alert for a cancer screening? Or maybe save you from a seizure? Read on for three medical situations in which your pup might just come to the rescue.

Over the past few years, several research studies have utilized dogs in the pursuit of one of mankind’s deadliest diseases: cancer. Findings show that dogs can smell the presence of cancer in various samples, particularly those taken of the breath. These biomarkers could eventually lead the way to early detection and a greater chance of survival.

In 2011, a group of doctors at the Ambulante Pneumologie in Germany reported their findings from scent trials in which dogs pinpointed breath samples from patients with lung cancer. The dogs had a 71 percent success rate in identifying the cancer samples.

The Pine Street Foundation in California has published similarly encouraging results. In 2006, it released a study in which five trained dogs smelled breath samples from 55 lung cancer patients, 31 breast cancer patients and 83 healthy subjects. Over several months, and more than 12,000 trials, the dogs correctly selected the samples in roughly 90 percent of the cases, as well as across all four stages of the cancers.

Dr. Michael McCulloch, Pine Street Foundation’s research director, credits a 1989 report in The Lancet, a British medical journal, for initially piquing his interest in the novel idea. The report described a dog persistently sniffing a mole on his owner’s leg, which a doctor’s visit later revealed was a malignant melanoma. This reminded McCulloch’s team of a Chinese medical text from the third century B.C., which noted how human odors could change when the body is diseased.

“[We thought the dog] could do the same thing for other people, given the right training,” Dr. McCulloch says. “We then asked the question: If the dog could sniff a surface tumor, maybe we could train the dog, and maybe the same type of odor would occur from tumors located deeper in the body? And what if the odor could make its way to the lungs and out as exhaled breath? That was the hunch we were going on.”

Pine Street’s current project tackles the early detection of ovarian cancer. The team is collecting breath samples from patients with ovarian, fallopian tube or primary peritoneal cancer, along with healthy controls. And, once again, the dogs will sniff . . . and sniff . . . and sniff.

So far, the exact organic compounds that dogs can identify remain unknown. Dr. Touradj Solouki, a chemistry professor at Baylor University, has since joined the Pine Street project to examine these mysterious markers. With detailed analyses, Dr. McCulloch hopes that “[Solouki’s] lab can tell us what our Labs are sniffing!”