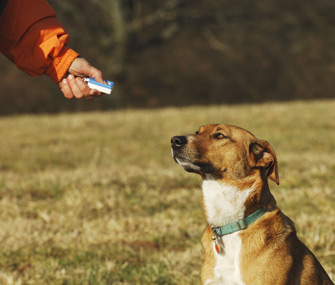 The clicker can be a powerful training tool; it allows a trainer to pinpoint exactly when an animal does something right and to follow up with a reward, reinforcing the desired behavior. Training with a clicker is so simple that even a preschooler can learn the basics. Despite its ease and value, though, there is still some confusion among pet parents about what a clicker is for and when and how to use it. Here are five common misconceptions about clicker training and the truth behind the click.

If I train with a clicker, I will always have to carry a clicker with me.

Truth: A clicker is helpful when training a new behavior. The clicker sound allows the trainer to pinpoint the requested behavior and precisely shape the animal’s response. The clicker noise can be paired with a verbal cue to reinforce the behavior. However, once the animal reliably performs the behavior in a variety of situations in response to just the verbal cue, such as “heel” or “sit,” then the clicker is no longer necessary.

The clicker is used to get the animal’s attention.

Truth: A clicker should not be used to get an animal’s attention; instead, it should be used to pinpoint when the animal does the asked-for behavior correctly. The sound of the clicker links the desired behavior and the reward that follows. It is almost impossible to offer a treat or reward at the exact moment an animal does what is being asked; instead, it is more feasible to mark the behavior with an audible noise as it happens. This helps the trainer to pinpoint the exact movement or behavior the animal did to achieve the reward. A clicker should only be used to mark wanted behavior and should immediately be followed by a reward.

I can’t do clicker training because my animal is afraid of the clicker sound.

Truth: For animals who react fearfully to the sound of a conventional clicker, quieter options can be used — a ballpoint pen, for example. Or other markers, like a cluck of the tongue or a whistle, can be substituted for the clicker. My favorite option is the Clik-R, which is much quieter than the normal clicker. Placing the clicker behind your back or inside your pocket can also help mute the sound. The vast majority of animals trained with a muted clicker will quickly learn to pair the sound with a reward and will move past their fear of the clicker noise.

The clicker can be used to keep a dog in line.

If I’m around other animals being trained with a clicker, my animal will get confused.