5 of the Sweetest Pet Adoption Stories of 2016

Any time a dog or cat in need finds a loving home, it’s special. But every year we remember a handful of adoption stories that really tugged at our heartstrings.

This year, they’ve included a surprising twist on a bachelor weekend, an NFL player who went out of his way to give a needy dog a new lease on life and a very elderly cat who found a new lap to sleep on, among others.

We’ll tell you more about each of them below.


Bachelors to the Rescue

We’ll be honest: We never expected to hear such a heartwarming tale come from a bachelor getaway weekend this fall. But these guys had their hearts in the right place. While they were cooking bacon one morning at the Tennessee home where they were staying, a canine visitor came to the door. The skittish dog, who they named Annie (for little orphan Annie), refused their offers to come inside but was happy to enjoy the delicious smell.

Over the next few days, the guys fed her whenever they saw her, and they noticed that she seemed to be protecting an area in the woods. When they went to check it out, they discovered that Annie was a mom! She was taking good care of seven healthy 5- or 6-week-old puppies. Annie and each of her puppies were adopted by the groom, his groomsmen or their relatives. — Read it at Michigan’s MLive 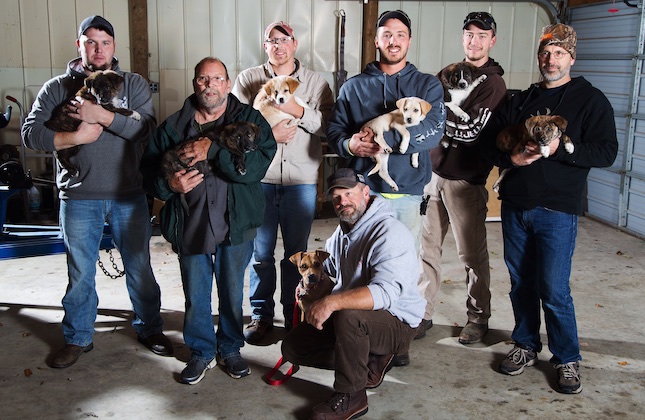 AP
A bachelor weekend became a rescue mission for a stray dog and her seven puppies.

Banjo, who was nicknamed “Britain’s Oldest Cat,” was left in a box outside a London animal shelter in September. The RSPCA Southall Cattery found that he had a microchip implanted in 1991, and they believe he was likely 2 years old at the time — which makes him somewhere between 25 and 27 years old now. Luckily, it didn’t take long for this “charming, sweet old man” to find a nice family. After just a few weeks at the shelter, he moved into his new home. — Read it at People Pets

Back in May, we told you the amazing story of the rescue of a German Shepherd known as Freeway Frida from a highway in California. According to calls to the Galt Police, the dog had fallen off the back of a pickup truck in April and waited near a median for five weeks, apparently hoping her owners would come back for her. The police often got calls reporting sightings of her, but they couldn’t find her when they arrived — until Office Sylvia Coelho shut down the road and saved the injured, malnourished pooch. “She just laid down and looked at us with those big brown eyes and was like, ‘Oh thank you,' and like, 'Please help me,’” Coelho said. The two formed a special bond and after seven weeks of rehabilitation, Freeway Frida’s hero adopted her. — Read it at Sacramento’s Fox 40