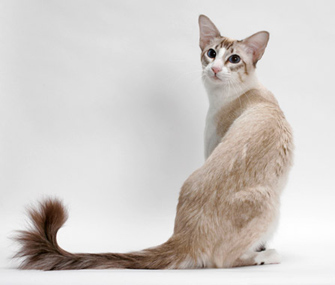 Tetsu Yamazaki, Animal Photography
Typically friendly and outgoing, the Balinese tends to get along with everyone he meets.

Little is known of how the Balinese came to be, but we’re so happy he’s here. He’s a sophisticated-looking cat who’s typically outgoing, intelligent and inquisitive. Learn more about this beautiful breed and whether he might be the right cat breed for you.

They’re similar to the Siamese.

The Balinese looks like a long-haired Siamese and comes in the same point colors: seal, chocolate, blue and lilac. There are theories that the Balinese might have been the result of crosses between Siamese and Angora or Persian cats in the 1920s, but he’s generally considered a natural breed, the result of a spontaneous genetic mutation for a long-haired coat within the Siamese breed.

Like the Siamese, the Balinese tends to be chatty. He can have a softer voice than his short-haired cousin but is usually just as conversant.

They tend to be extroverted.

Generally a friendly and outgoing breed, the Balinese can get along with kids, dogs and other cats.

The Balinese is typically an intelligent cat who may be willing to walk on a leash and learn tricks.

You'll probably find that the Balinese is a loyal sort. Don't be surprised if he wants to help you with whatever you’re doing, all the time.