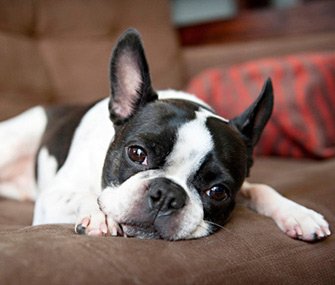 Leesia Teh, Animal Photography
What a handsome breed! The Boston Terrier certainly looks dapper in his tuxedo coat.
The Boston Terrier was bred to be a best friend and is one of the few dog breeds to originate in the United States. He’s generally a happy dog and enthusiastic in just about everything he does. Learn more about this all-American breed and find out if he might be the right dog breed for you.


They can make great family pets.

The Boston Terrier is generally friendly and tends to love just about anyone (even kids) — a stranger is just a friend he hasn’t made yet. In fact, it wouldn’t even be out of character to find him napping with the family cat.

Looking for a good snuggle? Though he’s typically high energy, the Boston Terrier is usually happy to hang out in your lap, or on a bed or sofa with you.

The views and opinions expressed in this video do not necessarily reflect those of vetstreet.com.

The Boston Terrier takes his name from the place he was developed: Boston, Massachusetts. He descends from a dog named Judge, who was probably a cross between a Bulldog and the now-extinct white English Terrier.

You can’t deny that the Boston Terrier is dapper — his markings resemble a well-tailored tuxedo, and his coat is relatively low maintenance. The black-and-white Boston is probably the most well-known, but the breed can also come in brindle or seal with white markings.

They tend to enjoy attention.

The Boston typically has a good sense of humor and enjoys clowning around. He doesn’t usually mind being in the spotlight.