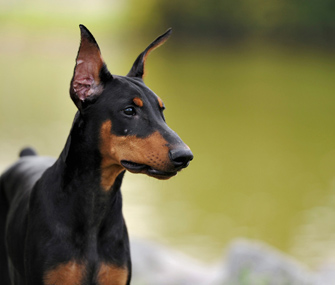 Julie Poole, Animal Photography
With proper training and socialization, the Doberman can be a great family companion.

The Doberman Pinscher may have a reputation for being a sharp and even sinister dog, but with proper training, he can be a friendly, stable companion. Learn more about this Working breed and whether he might be the right dog breed for you.

Considered one of the smartest dog breeds, the Doberman needs an outlet for his intelligence or else you might find yourself with a bored, destructive dog. Because he’s usually so smart, he also tends to take well to training.

The Doberman tends to be a loyal type who will protect his family. He’s also typically an alert watchdog capable of anticipating danger and threats. However, if he hasn’t been socialized and trained to behave appropriately around strangers, he may be suspicious of and potentially aggressive toward visitors in your home.


They can be athletic.

Typically an energetic breed, the Doberman may enjoy hiking, running and agility. In fact, in the 1950s, before agility and freestyle competitions were invented, the Doberman Drill Team thrilled audiences with its amazing physical feats.


They come in a variety of colors.


They can be good with children.

A Doberman raised with kids and other pets is likely to love and protect them.