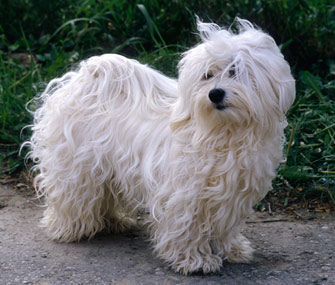 The Havanese was once nearly extinct on his home island of Cuba, where the breed's population dwindled after the Cuban Revolution. However, a handful made their way to America with Cuban refugees. The Havanese Club of America was formed in 1979, and the Havanese is now the 25thmost popular dog breed in the U.S.A., according to the American Kennel Club. Learn more about why this bright, lively pup might be the right one for you.

1. They're the national dog of Cuba.

The Havanese is named after the country's capital, Havana. Spanish settlers brought the Havanese to Cuba sometime in the 18th century, and a few Havanese came to the United States with Cuban refugees afterthe Cuban Revolution in 1959.

2. They know how to clown around.

Typically, this pup is easily trained and tends to be very intelligent. Because he can excel at tricks and usually has a great sense of humor, he’s often been used as a circus dog.

Though the Havanese is small — usually weighing between 10 and 15 pounds — he’s one of the sturdiest dogs in the toy group. However, you should still be mindful of that small size and supervise him around children to ensure their play doesn't get too rough, because while sturdy, he can still be injured.

The Havanese has a profuse, silky coat that grows to about six to eight inches if it’s not cut. His coat may be any color or combination of colors.

The Havanese’s happy, laid-back personality can make him a great family pet. He’s generally playful, friendly and adaptable, and he often even loves cats and other dogs.