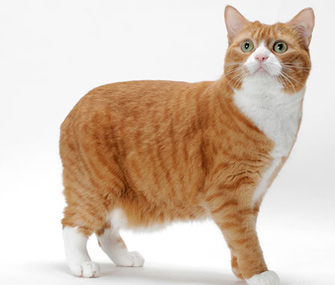 He may lack a tail, but that doesn't stop the Manx from jumping to high places and speeding around corners.
You might be familiar with the Manx, particularly if you’re a fan of cartoons: Stimpy, of The Ren & Stimpy Show, is a Manx cat. The breed is noted for his rounded appearance — round head, round eyes, rounded rear — and usually, his lack of tail. Get to know him a little better and see if he might be the right cat breed for you.


He tends to be playful.

It’s not unusual to see a Manx playing fetch or carrying his toys around. He also tends to be smart and dexterous: He's often capable of opening cabinets and doors.

The Manx tends to be a friendly, affectionate cat who enjoys being around people. Some Manx will give all their love to a single person while others will shower the whole family, even children, with affection.

The views and opinions expressed in this video do not necessarily reflect those of vetstreet.com.

He tends to be athletic.

He may not always have a tail, but the Manx has a powerful rear end that can help make him an excellent jumper. The breed's also capable of speeding through the house and racing around corners like a sports car.

He comes in many colors.

The Manx’s thick double coat comes in an array of colors and patterns, with the exceptions of chocolate, lavender, pointed or any of those colors or patterns with white.

He’s nearly identical to the Cymric.

The Manx is shorthaired and the Cymric is longhaired. Other than that, the two breeds are the same.