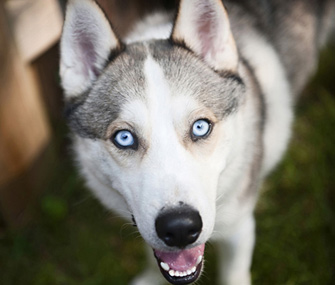 Generally happy, energetic and affectionate, the Siberian Husky usually doesn't take life too seriously. Learn more about this typically happy-go-lucky member of the Working Group and whether he might be the right dog breed for you.

If you love running in cold weather, the Siberian Husky might be the right running buddy for you (overall health permitting, of course). He was originally bred to pull sleds and tends to be athletic, lean and fast. Just remember to talk to your vet before starting any new exercise routines with your pet.

They tend to enjoy cold weather.

The Siberian Husky’s dense double coat makes him well suited for snow. He also tends to excel at winter dog sports. But keep in mind that even though the Siberian Husky tends to like cold temperatures, he can still be susceptible to frostbite, hypothermia and other winter hazards.

They usually get along with other dogs.

If you already own a dog and want to get another one, the Siberian Husky might be a good choice. However, this breed has a strong prey drive and doesn’t generally make the greatest roommate for cats and other smaller mammals.

Digging is usually one of the Siberian Husky’s favorite pastimes. He’ll likely leave a few holes in your yard if left unattended. You may want to consider giving him a spot in the yard where he can dig as much as he wants under your close supervision.

The Siberian Husky probably will never have a career as a watchdog — he tends to be affable, gentle and not overly suspicious of strangers or aggressive toward other dogs. He’s also not a big barker, but he may occasionally let loose with his distinctive, siren-like howl.