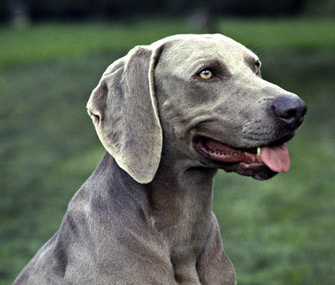 Sally Anne Thompson, Animal Photography
The "Gray Ghost" tends to like his people so much that he follows them like a shadow.

You might recognize the Weimaraner — his distinctive, silvery gray face was made famous by Weimaraner photographer William Wegman. He tends to be an energetic and loyal dog who loves to hunt and bonds deeply with his owners. Learn more about him and whether he might be the right dog breed for you.

They tend to be devoted to their people.

There’s a reason the Weimaraner is nicknamed the "Gray Ghost." He tends to have a habit of shadowing his owner everywhere and isn’t happy when he’s left alone. Keep in mind that separation anxiety can be an issue with this breed, and some Weimaraners can become so distraught when left to their own devices that they’ll bark, dig or try to escape.

The Weimaraner is generally an active dog who (overall health permitting, of course) can enjoy running, hunting, going for walks, boating and swimming. He can also excel at dog sports like agility and tracking. In fact, he typically loves to chase things, so be sure to confine him to a safely fenced yard and always walk him on a leash. Keep in mind that his athleticism and brains can also make him a talented escape artist.

The Weimaraner typically learns things easily, which can give you a head start with training, especially if you start early and remain consistent with his training.

The Weimaraner is likely to love you and aims to please, but he also likes to have his own way. He needs consistent training throughout his life to reinforce that you’re the one in charge — and training him will call for sensitivity, firmness (but never punishment) and an excellent sense of humor.

They tend to be easy to groom.

The Weimaraner’s coat is short and relatively easy to maintain, although it does shed. He needs to be brushed at least once a week. It’s also important to keep his toenails trimmed, particularly if he's out hunting with you.