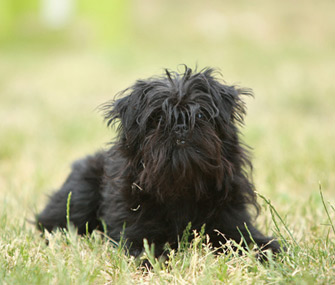 Nick Ridley, Animal Photography
Weighing in at 6 to 13 pounds, the Affenpinscher usually doesn't realize just how small he is.

The Affenpinscher — aka "the mustachioed little devil" — is a Toy dog who tends to have a big dog attitude. He tends to be affectionate and loyal to his family and is often highly intelligent. Learn more about the Affenpinscher and whether he might be the right dog breed for you.

They tend to be devoted to their families.

Wherever you go, the Affenpinscher will likely follow. He’s generally up for just about any adventure, as long as it’s with you.

The Affenpinscher will probably want to entertain you. He tends to be quite good at using his paws to manipulate toys, walking on his hind legs and even “singing” in a chorus if he has some fellow four-legged friends to join in.


They can be good watchdogs.

The Affenpinscher may be small, but he’s still often a fearless protector. He tends to be alert and will probably let you know if a stranger is around.


They tend to have strong prey drives.

Rodents beware: The Affenpinscher has terriers in his family tree and got his start as a ratter in Germany. Also, keep in mind that while he can get along with cats if he’s raised with them, some Affenpinschers will chase them.

The Affenpinscher needs a walk or other activity daily. In fact, his general athleticism combined with his intelligence can often make him a contender in dog sports like agility, obedience and rally.