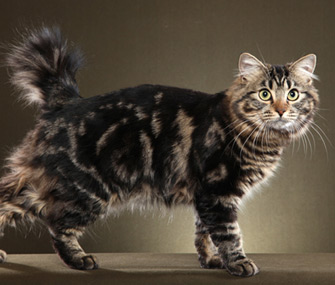 Thanks to his generally easygoing nature and willingness to play fetch and perform tricks, you might think the American Bobtail is essentially a dog in a cat’s body. Learn more about this often friendly and affectionate cat and whether he might be the right breed for you.

They tend to enjoy company.

The American Bobtail can usually get along with just about anyone, including children, other cats and even cat-friendly dogs.

Don’t be surprised if you find the American Bobtail dunking his toys in his water bowl.

They can be mischievous.

It may be in your best interest to keep shiny things out of the Bobtail's reach to ensure they don’t go missing. He can be a bit of a cat burglar, and you may find he likes to swipe your stuff.

The Bobtail will likely be happy going on walks on a leash and playing fetch with you.

The Bobtail came into being in the 1960s when a Siamese cat was crossed with a short-haired male tabby. The kittens produced from that mating had kittens of their own, many with the distinctive bob-tail look, which is about half the length of a normal cat tail.