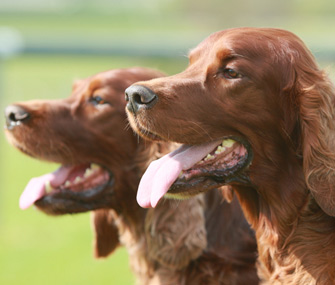 If you're a couch potato, this is not the breed for you. Irish Setters tend to have energy to spare.

If you’ve seen the 1962 Disney movie Big Red, you might be familiar with the Irish Setter, an often-charming redhead who seems to have boatloads of energy. This Sporting dog tends to retain his puppy-like enthusiasm until he’s at least 3 years old. Learn more about the dog breed and whether it might be right for you.

They might want to join you for your workout.

The Irish Setter can be a great companion for an active person who can give him the exercise he needs. He might enjoy a long walk, hike or run with you, provided you’ve gotten the OK from your veterinarian to start a new exercise routine.

They tend to be independent thinkers.

The Irish Setter is generally a very smart dog, but training him often calls for a large dose of patience and a great sense of humor. He can be a willing and eager learner, but he may stubbornly resist if he doesn’t think what you’re asking him to do seems like much fun. Keep training sessions short and give him plenty of positive reinforcement.

They generally love to be the center of attention.

The people-loving Irish Setter generally is outgoing and has a big personality — he tends to be a joyful, boisterous dog.

They can make good watchdogs.

The Irish Setter is generally affectionate with and loves his family. That combined with his alert nature can make him a good watchdog.

They can get along with other pets.

The Irish Setter can usually get along with dogs and cats if he’s raised with them.