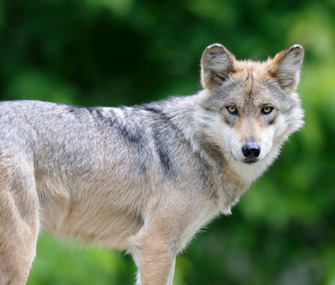 Thinkstock
The gray wolf is one of three wolf species in the world. The other two are the red wolf and the Ethiopian wolf.

How much do you really know about the majestic and mysterious wolf? In honor of Wolf Awareness Week, we chatted with Peggy Callahan, executive director of the Wildlife Science Center and a 30-year veteran of working with wolves. The Wildlife Science Center in Columbus, Minnesota, began as a federal research facility in 1976, and in 1991, transitioned to a nonprofit focusing on education.

Callahan shared these fascinating facts with us:

It’s true that a wolf, like your pet dog, is of the genus Canis — but dogs have been domesticated for thousands of years to live alongside humans, while wolves have not.

"The wolves taught me that captivity is nothing like domestication,” Callahan says. “Domestication is this process of selective breeding against the very characteristics that keep animals alive in the wild. And so I have come to be passionate that wolves don't make good pets; wild animals don't make good pets. The difference between captive and domestic is never to be underestimated."


2. Unlike many other species, the whole wolf pack raises pups together.

In black bears, mountain lions and plenty of other species in the animal kingdom, adult males can be aggressive toward and even kill their young. But not wolves. “In a wolf pack, all of the individuals — male and female — that are there regurgitate for the cubs, care for the cubs and raise the cubs,” Callahan says. In fact, females in the pack that aren’t pregnant go through pseudo-pregnancies. "So all these females feel like parenting, which is a huge adaptation.”

Need even more proof that wolves subscribe to the “it takes a village” school of thought when it comes to raising their young?

Callahan tells this amazing story: "I was working with a group of hand-raised wolves back in 1998. I was in with this wolf, and he carried a deer leg over to me, and he put it on my feet. And he looked at me, and I thought, This is bizarre. I had never, ever had this happen. So I kind of tossed it off to the side. He looked at me, and he went over and picked it up again, and he put it on my feet again, and he backed up and looked at me. And one more time, [I] tossed it aside. And he looked really frustrated. So the third time, he put it on my feet, I picked it up and pretended to eat it, and he looked really satisfied and trotted away. What I found out later was that I was pregnant. I didn't even know, but he did. He was feeding me."

Compared to other animal species, that is. “They hunt large prey for the most part. That's their evolutionary adaptation,” Callahan says. The wolf’s success rate in hunting is only about 6 percent, which means it takes everyone in a social group to kill enough food to sustain the pack. Coyotes, on the other hand, hunt small animals and are more efficient predators — which is why they survive with a much looser social structure that lends itself to solo hunting.


4. Members can get kicked out of the wolf pack for unsuccessful hunting.

“This is a business relationship for survival, because of their low success as predators,” Callahan says of the wolf pack. “It's all about food. It's all about survivorship. If there's a wolf pack member that doesn’t hold up its part of the bargain, it can be killed or kicked out. And it does happen. In fact, it's very common. One of the leading causes of death for wolves in the wild is other wolves."

5. A wolf’s howling can have many fascinating explanations.

One kind of howl serves as territory establishment — a whole pack will howl to keep neighbors out. Then there’s an aggressive bark howl reserved for intruders. “And then there is the howl that I have experienced myself, when a wolf loses an animal that's close to it,” Callahan recounts. “We had a female that lost a mate — they'd been together for 14 years — and he passed away at 17. She howled by herself, and no one answered, for two months.”


6. Two of the three subspecies of red wolf are now extinct.

There are three species of wolves in the world: red, gray and Ethiopian. In North America, we have red wolves and gray wolves. The East Coast is home to the one subspecies of red wolf still in existence — the Texas red wolf, which was reintroduced into North Carolina in the 1980s. The two other subspecies of red wolf — the Florida black wolf and Gregory’s wolf — are now extinct. Miraculously, the current Texas red wolf population was rebuilt from just 14 animals left alive in 1979!