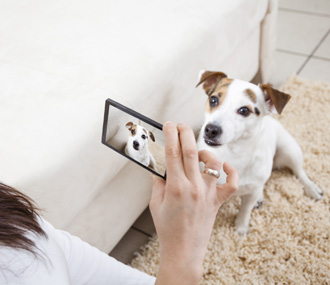 Thinkstock
When taking video of your pet, remember that she takes his cues from your attitudes and actions, so if you get stressed out, she will, too.

We can’t get enough of cute pet videos, especially when the pet is our Oscar-worthy dog or cat.

But getting a furball to perform on cue isn’t easy. So we asked Jenna von Elling, a video producer and photographer who has coaxed performances from dozens of animals for Vetstreet videos, to share her secrets.

Here are von Elling’s tips and tricks for making pet videos so outstanding, even strangers will retweet them:

Some animals adore getting ready for their close-up, while others prefer being left alone. “I’ve met some animals who love being on camera,” says von Elling. “But for others, it’s too out of the ordinary, too scary.”

The trick is to know your animal’s process. Dogs are natural pleasers, so they are more likely to perform on cue, if provided with the right motivation (aka treats). Von Elling’s secret weapon is cheese. “But don’t up the treat value so much that the animal is overexcited,” she said. “Then, all you’ll have on video is your pet mauling you for cheese. You have to work up to high-value treats.”

Most cats, on the other hand, rarely need to impress you. They’ll perform when they’re good and ready, so plan to camp out, camera cocked until kitty naturally does what you want to capture.

Before you start the camera rolling, drill your pet on the tricks or behaviors you want her to perform on cue. Then, shoot some throw-away footage before you record the good stuff. That will help your pet get comfortable with the camera and stay focused when it’s time to perform.

Smartphone cameras are perfect for taking most pet videos. They’re unobtrusive, probably familiar to your pet and have auto focusing that lets you chase animals around without the video becoming blurry.

A GoPro camera mounted on your head would be effective, too. GoPro allows for unencumbered chasing as yourpet does something hilarious. Since GoPro is worn like a hat, it might look more natural and therefore be less distracting to your animal.

If you want a Hollywood look, in which you can blur and focus different elements of your shot, you’ll need a DSLR (digital single-lens reflex) camera that shoots video. But, von Elling says, they’re bigger, and notoriously difficult to focus for video. A larger camera can also be more intimidating to your star.

Properly lighting your subject will make for improved pet videos. Mostly, natural light will do. So, whenever possible, shoot in daylight, making sure not to backlight your subjects, which makes them hard to see.

If you often shoot after dark, invest in camera lights: You can buy a three-light kit for about $150.

6 Tips for Creating Get Pet Videos