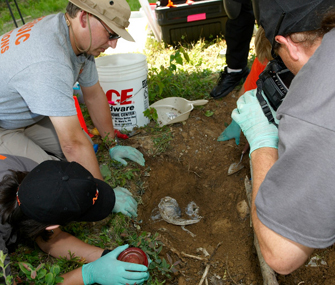 Photo courtesy of the ASPCA
Jason Byrd out in the field with some of the veterinary forensic students.

When crimes against animals need to be investigated and prosecuted, a variety of professionals may be involved, including police, animal control, veterinarians and forensic investigators. But often, they haven't been specifically educated on how to apply their animal knowledge to investigating crimes, or their investigatory skills to crimes involving animals. Now there's a new place for those professionals to get formal training, as well as a potential new way into the field. May marks the start of the new two-year master's degree curriculum in the ASPCA Veterinary Forensic Sciences Program at the University of Florida’s Colleges of Medicine and Veterinary Medicine in Gainesville, Florida.

Learning How Human and Animal Forensics Are the Same — And Different

Jason Byrd, director of education for the program, says that the fundamental idea of forensic science is the same whether it's human or animal. "It's a group of sciences that work together to be able to bring the right information to bear in court," he says. "It's the same for veterinary forensics; you just switch species."

Switching species, though, requires specialized knowledge, such as how to identify the victim when you don't have the entire body.

"I spent 25 years in human forensics going to crime scenes, and nearly all the time when I was called to a crime scene, I didn't ask what I was going to look at — I knew it would be a human," Byrd says. "With animal cases, you don't know all the time what species you're going to be dealing with."

He recalls one case where some large bones were found and police were concerned that they'd found evidence of a murder. "We found that some of the leg bones were a little too long to be a person," he says. "It turned out to be emu. We did a little bit of research, and not too far from there had been an emu farm, and two had escaped, never to be found — and apparently we had found them."

The analysis of evidence also requires attention to important differences in details. "Bloodstain analysis is one thing that is quite different," he says. "They have tails that wag, they have fur, they're shorter than we are for the most part, so the bloodstain trajectory is different."

This means that many of the equations that work for analyzing human crimes need to be reworked when you're dealing with animals — for instance, determining how much force was involved in breaking a bone or causing a bruise. "All the information we know about force and trajectory and depth of bruising and how to equate that back to force of impact more or less goes out the window — we have to relearn that completely," he says.

A Cutting-Edge Program for Veterinary Forensics

Some of the research needed, in fact, is being done within the program; as we spoke, Byrd was about to conduct some experiments on how to determine the distance of a shooter from the victim. "With people, there may or may not be an intermediate object like clothing; with an animal, there's always an intermediate object, and that's fur," he says. "Length of fur, thickness of fur, undercoat — all of that has to be rethought when you're dealing with a shot animal and law enforcement is asking how far [away from the shooter] the individual was at the time of the shot."

One of the program's classes, called Forensic Applied Animal Behavior, is also on the cutting edge. "As far as we can tell, the class has never been offered before by anybody," he says. The class covers a variety of aspects of animal behavior that are important to law enforcement, such as teaching them how to understand dog behavior as a way to reduce officer shootings of pets and what the research shows about how victims of animal abuse and cruelty can be rehabilitated.