Home ›
Our Pet Experts ›
Laura Cross ›
A Rescue Surprise: The Collie Mix Who Wasn't a Collie

A Rescue Surprise: The Collie Mix Who Wasn't a Collie 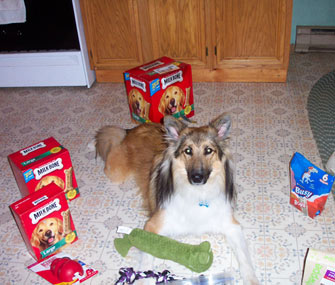 Max shows off his new gifts after his owner's co-workers threw a doggy shower for him.

When Sue McDonald, a physical therapist assistant from Bailey, Colorado, set out to adopt a dog, she wanted a calm and low-key adult Collie. In November 2013, she came home with what she thought was a 1-year-old Collie mix named Max. She quickly learned that he was energetic, puppylike and entirely unlike any of the Collies she had owned before. In fact, she’s not even sure he is a Collie mix.

But even though he doesn’t behave like she expected him to, McDonald still loves Max and appreciates his sweet demeanor. Plus, the youthful pup brings out the playful side in McDonald's 10-year-old Collie.

We caught up with McDonald to hear more about her pup’s heartwarming rescue story.

Q: Can you tell us how you rescued Max?

A: I lost one of my Collies to cancer and was ready for a new dog. I wanted to go to a rescue because I didn't want to get a puppy. I work full-time. I found Southwest Collie Rescue in El Paso, Texas, and they had Max there. I applied to adopt him, and his foster family sent some videos. I live outside of Denver and ended up driving to Albuquerque, New Mexico, and they met me there with him. He is not a Collie. Not even close. They thought he was, but now that I've had him a few months, he's got a different temperament from a Collie. But he's very sweet and brings a lot of joy to my life. So it's a good thing.

Q: What breed do you think he is?

A: Well, I've been working with a trainer because he's very high-energy. Much more than I'm used to in a Collie. The trainer thinks he's a Belgian Tervuren mix, which is a rare breed. When I looked it up on the Internet, the pictures do look very similar to him. I think he might have a little Collie in him. There may be some Sheltie. But he's definitely a different species than my Collies. But he's a good boy. He's a lot of fun — just more energy than I knew I was getting into.

Q: Do you know anything about his life before you found him?

A: He was found wandering the streets of El Paso. They thought he was 1 to 2 years old. I don't know. When I took him to my vet, she said he was young because he doesn't have any tartar on his teeth. And he acts like a puppy with the biting and the chewing and the playfulness. So I would say he's no more than a year old.

They put him in a shelter, and somebody who was familiar with the Collie rescue in El Paso saw him and called [the rescue], and they came. The rescue put him in a foster home, and they put him on their website. He was lucky he didn't get euthanized in the shelter. A Collie lover came through and thought, "Oh, that's a Collie!" So he got a pass out of there.