Home ›
Our Pet Experts ›
Dr. Patty Khuly ›
A Vet Confesses: I Delayed Spaying My Dog — and the Reason May Surprise You

A Vet Confesses: I Delayed Spaying My Dog — and the Reason May Surprise You 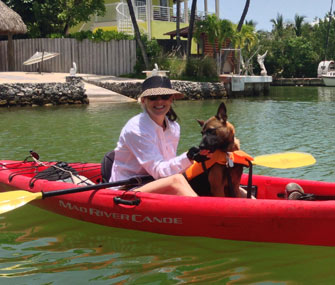 Though I don't speak for all veterinarians, I can offer you my personal take on an interesting experience singular to my profession: practicing medicine on my own pets.

For most of us, it happens relatively often. For me, perhaps, it happens a little more than just “relatively.” With five dogs, two goats, ten chickens and a bevy of marauding cats, I take my work home. More often, however, it’s more like I take my home to work—a lot.

Take last week, for example. That time it was all about Violet, my Belgian Malinois girl. After waiting 20 months, I decided it was finally time to spay her.

Why I waited so long has a lengthy explanation that deserves its own post, but suffice it to say that, in part, my reluctance to perform major surgery on my own dog played a significant role.

Performing Two Procedures at Once

Despite its pervasive reputation as a “simple” procedure, the canine ovariohysterectomy involves a complex bit of mental and manual manipulation — especially when performed on the seasoned bitch. I promise you: Removing mature ovaries along with the uterus is no piece of cake.

In Violet’s case, I performed an increasingly popular variation on the traditional American spay. Widely considered its European counterpart, the ovariectomy involves the removal of the ovaries alone. Despite its more limited scope, it’s really no simpler.

The ovariectomy has pros and cons that also deserve a separate post. In this case, one reason I chose the procedure was that it allowed for a smaller incision than the traditional spay, and that incision was closer to the stomach, where I needed to perform a second procedure. What's more, a smaller incision is usually faster to suture, less messy and potentially less painful.

Given that Violet’s deep-chested breed is prone to a condition known as gastric dilatation-volvulus (aka, GDV or “bloat”), I elected to tack her stomach to its adjacent body wall. That way, her stomach would be way less likely to fill up with gas and twist in the future (not necessarily in that order).