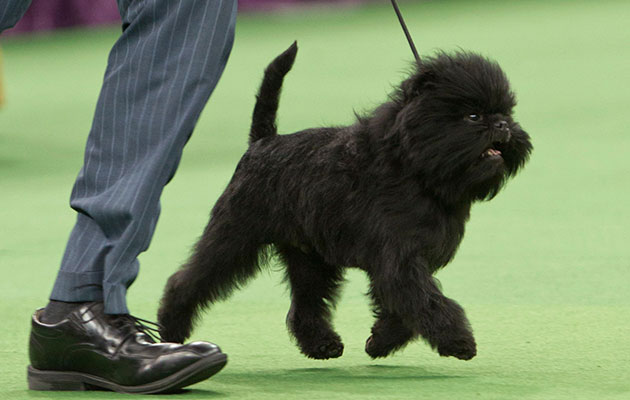 Banana Joe, a tiny Affenpinscher from Massachusetts, got the ultimate retirement gift on Tuesday night: the Best in Show title at the prestigious 137th Westminster Kennel Club Dog Show at New York City’s Madison Square Garden. The 5-year-old CH. Banana Joe V Tani Kazari, a veteran in the ring who’s lapped up 85 other Best in Show wins at other competitions throughout his career, was chosen as the top dog from among 2,721 canines — the show’s largest number of entries in 15 years. They fell into 187 breeds, including two that were added to the competition this year: the Russell Terrier and the Treeing Walker Coonhound.

His win makes this the second consecutive year that the Toy Group has clinched the Best in Show title. Joey succeeds the wobbling Pekingese CH. Palacegarden Malachy, who won the coveted title last year. Now 5 years old, Malachy has retired in Pennsylvania with his handler and co-owner, David Fitzpatrick, and eight other Pekingese.

Joey’s thrilled handler, Ernesto Lara, snatched the little black dog up and hugged him tight after he was named the champion. Celebrating the dog’s win, Lara was asked to describe Joey’s personality. “Nobody told him that he’s a small breed,” he said. “I don’t think he’d believe that.”

For the first time, a Reserve Best in Show title was also awarded this year. It went to an Old English Sheepdog who stunned the dog show world with his Herding Group win on Monday. At just 20 months old, Swagger was a relative novice who hadn’t yet won a championship before coming to Westminster.

Best in Show Judge Michael J. Dougherty didn’t see the seven contenders until he entered the ring at the end of the night, but his picks aligned with those of the crowd, who cheered loudly for both Joey and Swagger.

“Every one of you deserves some serious ribbonage,” Dougherty told the handlers of the seven finalists before choosing his top two picks.

Dougherty is a second-generation dog show person from California. He’s a veteran in the sport of dogs, with more than 50 years under his belt. In addition to his vast experience as a judge, he’s been a professional handler, and he and his family have bred and owned Whippets, Miniature Schnauzers, Smooth Fox Terriers and Keeshonden.