All Dogs Go to Kevin: How Pet Loss Made Author Dr. Jessica Vogelsang a Better Vet 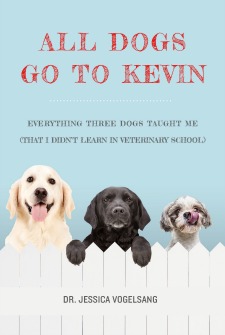 When Dr. Jessica Vogelsang’s beloved Golden Retriever, Emmett, died, her daughter and son were just 4 and 2 years old. The children had known Emmett was sick, but Dr. Vogelsang (or Dr. V, as she’s known on her blog, Pawcurious) wasn’t sure how to best explain that Emmett would pass away by the time the kids got home from preschool.

So like many pet-owning parents of young children, she waited until Emmett was gone before telling them he’d died, explaining that he’d gone to heaven. Her son, Zach, misheard her, thinking she said Emmett had gone to Kevin.

Although Emmett’s passing marked a heartbreaking day in the Vogelsang household, an idea took hold in Dr. V’s mind, and her first book, All Dogs Go to Kevin: Everything Three Dogs Taught Me (That I Didn’t Learn in Veterinary School) was born. (Emmett’s death also helped her recognize that there were definitely better ways to explain a pet’s passing to children.)

Dr. V weaves in humorous tales of awkward adolescence as a New England child suddenly transplanted into the California sunshine alongside her experience as an underprepared veterinary student, while also sharing stories from her years as a newly minted vet and a brand-new mom.

Vetstreet: Your book title includes a name — Kevin — because of your son’s misunderstanding of where you said Emmett went when he died. But there’s more to it than that, right?

Dr. Jessica Vogelsang: When Zach misheard me, it turned into this whole joke on the blog — that someone named Kevin was running around stealing our pets. But a couple years later, I had a real-life friend named Kevin who died from pneumonia. Kevin was this gregarious single guy, always the life of the party, and he's the type who would be up there with all the dogs, hitting on the hot angels. I really like the idea of Kevin being up in heaven, taking good care of the dogs.

Vetstreet: Who are the three dogs you refer to in the title? 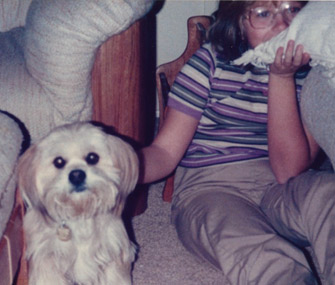 Dr. V: Taffy was a neurotic Lhasa Apso mix I got as a kid. I was extremely shy and introverted, and my mom was hoping she’d be a way to help me meet and bond with other kids after we moved to California. Turned out, Taffy was also shy and introverted, and it drove my mom nuts that we’d just stay inside together and read in my room. I was having a really hard time fitting in, so to be able to come home from a long day where I felt like I was from a different planet, then have Taffy accept me, it was just what I needed.

Emmett came into my life shortly after I started at a veterinary practice. He was an extremely confident dog and a great therapist. When I had my daughter, he ended up really helping me with my postpartum depression. Being a new mom is really isolating, and people don’t always recognize that; often they shy away, because it’s uncomfortable, but dogs don’t do that — they get in your face and lick you.