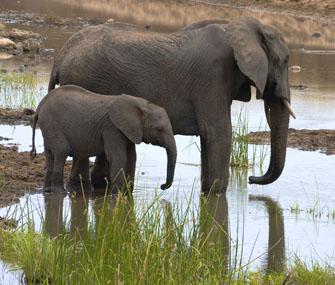 Thinkstock
The typical length of an elephant pregnancy is 22 months.

The last thing modern moms need is yet another reason to feel that they're not doing a good enough job. In the animal kingdom, there are plenty of mothers who make your efforts pale in comparison, but don't worry — there are others who will make you feel a lot better about yourself this Mother's Day.

While nine months may seem like forever for some human mothers, pregnancy lasts much longer for many animals. So be glad that you're not a rhino, who's pregnant for 16 months, a sperm whale (16 to 18 months) or an elephant (22 months). Be even more glad that you're not an elephant who's just a little bit overdue: Last year, an elephant gave birth at a British zoo after being pregnant for 700 days. Yes, that's almost two years.

Mammals don't have the worst of it, either: An alpine salamander's pregnancy can last three years, and it's believed that the frilled shark may carry offspring for three and a half years.

Speaking of toting around babies — along with extra weight — polar bears gain 400 pounds in pregnancy!

Still, you're both better off than the kiwi bird, who's about the size of a chicken but whose egg is six times the size of a chicken egg. The egg can take up so much room that the kiwi can't fit food in her stomach and has to fast for the last two or three days of her pregnancy. And then she has to lay the egg, which can weigh up to 20 percent of the mother's weight — the equivalent of a 120-pound woman giving birth to a 24-pound infant.

Every neighborhood has that overachieving mom who makes everyone else feel (and look) bad, and the same is true for the animal kingdom. Most cold-blooded animals have an enviable mothering style — like frogs, who lay thousands of eggs, and then abandon them, figuring that at least a few will survive on their own. 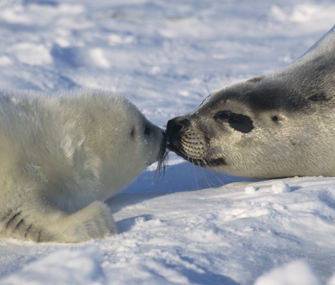 Thinkstock
Harp seals nurse their babies for 12 days without eating themselves, losing pounds in the process.

But some frog species apparently disapprove of this method. The mountain chicken frog deposits her eggs in a burrow in the ground, and once her tadpoles hatch, she feeds them by laying more eggs for them to eat. Certain types of poison dart frogs also lay eggs for their tadpoles to eat, and then spoil them even more, giving each tadpole an individual room, such as a little pool of water in a plant or a small hole in a tree.

What to feed the kids is always a source of contention for competitive moms. Our fellow mammals have no choice but to breast-feed, and if you found it hard, be thankful that you're not a harp seal. They nurse their young for 12 days without eating, losing about seven pounds per day. It's an effective post-pregnancy diet plan, but not a very pleasant one.

If you think producing milk is taxing, mammals don't have the worst of it when it comes to feeding their young with their own bodies. There's a type of amphibian called a caecelian, which has risen to the challenge in rather repulsive ways by growing an extra layer of skin every three days that the young scrape off and eat.

But at least those moms survive the process. For some kinds of spiders, the young's first meal is their mother. Although these spiders only lay one clutch of eggs in their lives and die afterward, the hungry babies certainly don't wait to eat — they start chowing down on her while she's still alive.