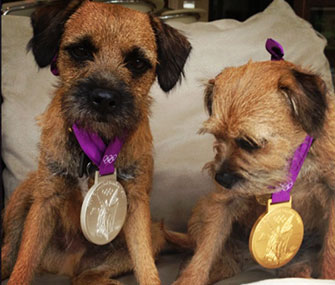 These two would certainly take gold in a cuteness competition. Just a day after Great Britain’s Andy Murray won Olympic gold in an upset over tennis great Roger Federer in singles, and earned silver in mixed doubles, his hard-fought hardware was taken — by two adorable thieves.

The champ’s girlfriend, Kim Sears, tweeted a picture of the couple’s Border Terriers, Maggie May and Rusty, wearing the medals with pride.

“Here we go folks ... Just checking to make sure Rusty definitely has the silver, obviously,” said Maggie May on her Twitter feed, as she looks at the silver. The popular pooch has nearly 11,000 followers — and is sure to gain more now!

And if you think Maggie May and Rusty are cute, be sure to check out the pets who are cheering on their owners as they compete for Team USA in London.