Home ›
Our Pet Experts ›
Gina Spadafori ›
Are Dog Parks Dangerous? What to Watch For on the Grounds

Are Dog Parks Dangerous? What to Watch For on the Grounds 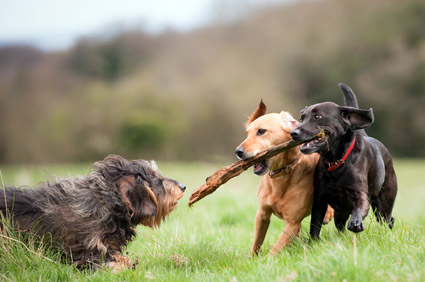 Q: We took a puppy class, and the trainer told us that she couldn't recommend any of the local dog parks — or, in fact, the idea of dog parks at all. She said that no puppy should ever go to a dog park and that she wouldn't take her own dogs to them because they are "dangerous." I don't have a yard to speak of, really just a patio, and I wanted to take my dog to the park when he's older. It's the only place it's legal for him to be off-leash. What do you think? — T. R.

A: One of the reasons having a large living space isn't so critical in keeping a dog anymore is that many communities have become much more dog-friendly. Cities, both large and small, have responded to dog owners' desire for off-leash play areas and have even allowed businesses to let dogs dine on patios in a style long enjoyed in many parts of Europe. Dog parks, though, tend to be only as good as the people using them. As a dog owner, you need to look out for the safety of your dog while making sure he isn't causing problems for others. Yes, there are dog-park bullies!

The best way to check out a dog park is to go during off-peak hours. You want to see clean grounds and clear rules for pickup and good behavior, a double-gated entry so dogs don't walk in on leash (a known fight trigger) and, in the best parks, a separate area for smaller dogs.

Keep Some Things at Home

Whether or not children should be allowed is a matter of some controversy, but dog experts generally agree that it's safer for all involved if they are not. And, of course, all dogs should be current on their vaccines (that means no puppies), well-socialized and non-aggressive. People should be paying attention to keeping their own dogs out of trouble, not answering their e-mail or texting.

When they work, dog parks are great for getting pets the exercise they need. When they don't work, they put people and pets at risk of injuries, perhaps even fatal ones. So, go forth and unleash, but do so with common sense and caution. And if you find yourself feeling uneasy about the other denizens of the park — human or canine — take your dog home. He can always play another day.