At Ohio Shelter, Fat Cats Are a Big Deal 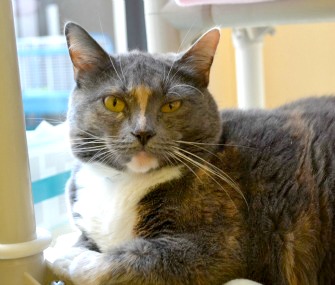 What began as a fun promotion to showcase hard-to-adopt overweight cats is now a successful, permanent program at a Columbus, Ohio, humane society. The program at the Capital Area Humane Society (CAHS) is called “Fat Camp,” and while some might chuckle at the name, there’s nothing funny about the program’s success. “It used to take three to four months to find a home for one of our heavier kitties,” says Mary Hiser, the shelter’s development and communications manager. “Now it just takes two to three weeks.”

The CAHS has seen an increase in overweight or obese kitties coming into its care as obesity rates rise nationwide. More than 58 percent of U.S. cats are considered overweight or obese by their veterinarian, according to a recent survey by the Association for Pet Obesity Prevention (APOP).

In 2010, the CAHS veterinary staff became frustrated over how hard it was to find homes for overweight cats. Sara Tayse, CAHS’s veterinary services manager, believes hefty kitties in shelters are often overlooked because they aren’t as active or don't appear as friendly as the more spry cats. So the staff came up with a way to make these heavier cats more visible and help them lose a few pounds as well.

The shelter’s glass-enclosed atrium became Fat Camp, the new home for pudgy feline residents. In this cageless environment, the cats are more visible to the public. And, Tayse says, the larger space requires the cats to go farther to get to their food, water and litterbox, getting the cats much needed exercise and the opportunity to show off their personalities.

Some clever signage and a little marketing launched Fat Camp into a big-time success. First, campers' nametags were given descriptions like “I’m Just Fluffy” or “Help Me Shed.” Next, the organization reduced the campers' adoption fees from $70 each to $15 each or $20 for two, to provide incentive for prospective adopters to take a second look at the larger felines.

The CAHS shared the promotion on its Facebook page, and after local media picked it up, the story quickly went viral in the national press, showing up in the Huffington Post, Fox News, the Associated Press and more.

Some critics wondered if the reduced rate devalued the cats or would attract the wrong kind of bargain-seeking adopter. Others felt it was wrong of the CAHS to exploit their overweight kitties.

Hiser dismisses these concerns, saying that the same stringent application process applies to adopting these cats as to the rest of the pets in their care. “And it’s not meant to be disrespectful to the cats. We’re certainly not making fun of them,” she says.