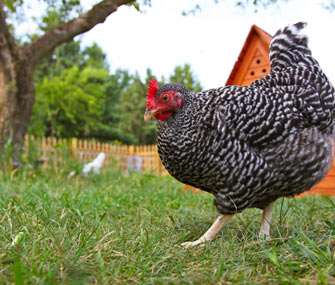 Backyard chicken keeping is all the rage these days, particularly with urbanites or suburbanites who want to know their food is local, more humane and natural. Chicks are cute, popular with kids, and cheap and easy to buy either locally or through the mail. Many modern day homesteaders do not realize, however, what goes on behind the scenes at chick hatcheries or the care commitment that chickens will require.

My family recently bought a small farm and we were eager to get chickens. Since we are vegetarian, we view chickens as pets that need “forever homes,” and sought to obtain them in the most humane way possible. I did my research, and here’s what I learned.

Hatcheries: Behind the Scenes

Most people who buy chicks only want hens because they desire fresh eggs. But since it’s difficult to tell the sex of young chicks, they are sold with only a “90%" chance guarantee that they will be female. However, farm animal rescue organizations estimate that 20 percent to 50 percent of “hens” are actually roosters.

Because male chicks are unwanted (roosters are prohibited in many urban/suburban areas), the males of egg-laying breeds (versus “broiler chicks” who are used for their meat) are killed in incredibly cruel ways. One horrific method is maceration, which means being fed alive into a grinding machine. This method, unbelievably, is actually approved by the American Veterinary Medical Association. Other ways in which male chicks are killed involve breaking their necks, electrocuting them or suffocating them with carbon monoxide. If they are not immediately disposed of via one of these methods, male chicks may also be used as live food for other animals.

Chicks that survive the hatcheries are shipped to stores or directly to consumers very soon after hatching. As anyone with common sense might conclude, shipping day-old animals can be harmful to them, even deadly. Newly-hatched chicks may also have their beaks cut off (to prevent pecking on their flock mates once grown) and are stressed by the shipping process. Chick hatcheries often include extra chicks in mailed packages because some usually die. And let’s not forget the poor chickens that are kept in the hatcheries to produce all of these chicks.

For all of these reasons, we did not buy our chickens from a hatchery or breeder (or local pet/feed store that buys from such a source). Instead, I contacted our local SPCA and asked to be put on a waiting list for hens. We ended up adopting two groups of chicks—11 total. One of them, named Phyllis Diller (the most outgoing and friendly of them all), blossomed into a rooster. And he’s awesome. But we are lucky to live in the country where, although our nearest neighbor might faintly hear Phyll’s crowing, it’s not likely to be a problem. However, in more populated areas, roosters are quite unpopular and sometimes banned altogether. And even enthusiastic new chicken owners sometimes quickly find themselves becoming disenchanted by their budding rooster when he starts waking them up before the crack of dawn. The bottom line is to be sure you read and understand any local laws or ordinances that would regulate how much land you need in order to have chickens (surprisingly, even many rural towns require large-sized lots), how many birds you can have, and whether or not you are allowed to keep a rooster (or even want one). Also be sure to talk to your neighbors ahead of time in order to minimize any potential conflicts.