Body Language: The Difference Between Cats and Dogs 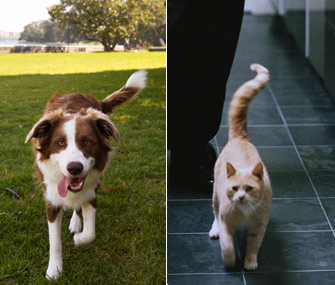 Can cats and dogs ever be friends? Some can, while others will fight like — well, like cats and dogs. Why the inconsistency? The problem may be that the two species don't always speak the same language.

Cats and dogs communicate — with us and with each other — through body language. When using body language to interpret what our pets are saying, it is important to consider both the context and the pet's individual personality. While certain physical cues commonly appear in both cats and dogs, those cues don't always mean the same things, and it's important to know the differences in order to better understand your cat or dog.

Your Cat Is Saying One Thing, but Your Dog Is Saying Something Else

Here are a few examples of behaviors that may communicate dramatically different things for each species.

Tail held high: When a cat holds her tail high, it can signal that she is friendly and relaxed. The higher the cat’s tail, the more confident she may be. However, if her tail is raised high with the fur erect and puffed out, it usually indicates alarm or potential aggression. As she becomes more unsure or fearful, her tail is more likely to slink lower.

When a dog holds his tail high, on the other hand, it often signals high arousal and the possibility of aggressive behavior. A dog that is agitated and about to aggress may also flick his tail back and forth vigorously. A dog is more likely to carry his tail in a neutral position, extended out behind him, when he is relaxed.

Wagging tail: Friendly dogs wag their tail loosely back and forth at medium height. When a cat’s tail begins to wag back and forth, an unfriendly encounter or predatory attack is likely to occur.

Closed mouth: Relaxed cats have closed mouths; relaxed dogs may have a closed or partially open mouth. The more tense a dog is, the more tightly closed his mouth becomes, although a very stressed dog may pant heavily or yawn.

Ears up for greeting: A cat who is confident greeting people will normally hold her ears forward and alert. If her ears move backward or twitch, it may indicate uncertainty or that the encounter is not going well. By contrast, one sign of a friendly dog is that his ears move back just slightly. A submissive dog will move his ears back even further as an appeasement gesture. Dogs with erectly pricked ears may be ready to stand their ground against another animal if necessary — but this behavior is specific to the individual dog.

Turning to the side: Both dogs and cats turn their bodies to the side when attempting to shut off a potential threat. A dog may do this in order to show that he means no harm, while a cat may be trying to appear larger and more threatening to her opponent.