Book Tracks the Curious Travels of a Lost Cat 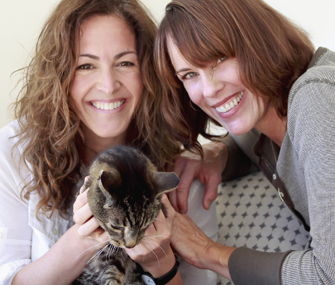 Photo by Klea McKenna
The author and illustrator of Lost Cat.

It's a nightmarish thought for a cat lover, your beloved pet going missing. If your cat came home after you'd given up hope, how would you react? Probably rejoice and move on, right? But when Lost Cat author Caroline Paul's cat, Tibby, disappeared while Paul was recovering from an accident, then reappeared five weeks later, she couldn't leave it alone. She and her partner (and illustrator of the book), Wendy MacNaughton, embarked on a project to figure out where he went. They not only answer that question, but also end up learning some unexpected lessons about life, technology and relationships.

Q. My first question is about your previous book, Fighting Fire, but it's actually relevant: You used to be a firefighter — did you ever rescue a cat stuck in a tree?

A. I never went to a call for a cat stuck up a tree, but I did rescue a lot of animals from fires. They used to tease me and call me Doctor Dolittle because I was always concerned about animals when I went into a fire. I'd look for the food bowls or talk to the owners.

I remember one particular rescue where it was super smoky and I saw the cat sitting on the windowsill, and I know cats — they run, they're skittish. I tried to mind meld: "I'm here to get you, I'm here to get you..." I walked right up and put her in my coat. She didn't run from me — she knew what I was there for, and that was fairly typical of most of the animals. Except the first animal I rescued, who bit me — it was a little dog. 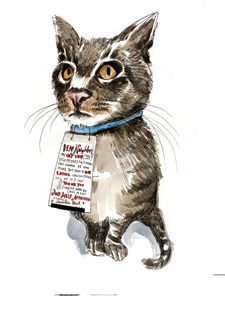 One of the book's illustrations by Wendy MacNaughton.

The Quest: Where Do Cats Go?

Q. After Tibby vanished and came back, one thing you did was contact pet detectives, some of whom were confused by your request.

A. Confused is actually putting it nicely. I think some people thought I was a little bit nuts.

Most pet detectives are looking for lost pets. I wanted them to figure out where my previously lost cat had been, and that flummoxed most of them. With the exception of the pet detective that used dogs, who sort of got me and was very plain and said, "It sounds like GPS is going to be your only hope."

Q. Some of them also seemed maybe a little shady?

A. I don't like to judge, but the woman who kept insisting that he just couldn't find his way home — I already knew that was so not true.

Q. And that seems like an unlikely theory in general — most professionals advise that you look near your home for a lost cat, since most don't go far.

A. Some cats do get far, like if they get stuck in a car engine, but they're not like dogs that shoot straight out and keep running. But we've collected a lot of lost cat stories — some cats have been found 3,000 miles away for some unknown reason. A lot of the stories are quite miraculous, but the one thread that I've found is that if you microchip your cat, you have a much better chance of being reunited.