Home ›
Our Pet Experts ›
Mikkel Becker ›
Can I Teach My Dog to Stop Chasing the Cat?

Can I Teach My Dog to Stop Chasing the Cat? 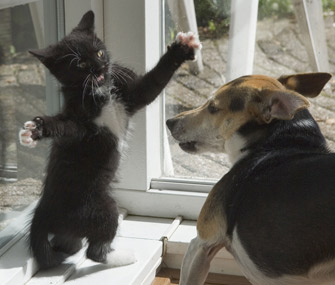 Q. Any time my cat makes a sudden move, my dog chases her. The dog thinks he's playing, but the cat doesn't like being chased. How can I put a stop to this?

A. Dogs and cats can get along fabulously — until the cat bolts and the dog takes up the chase. Even though most dogs will not follow through and injure the cat, the scenario can cause some serious emotional stress for the cat. To maintain safety and sanity in your home, there are a few important training steps to take to end this behavior.

I spoke with Dr. Sophia Yin, DVM, Veterinarian and Applied Animal Behaviorist, about ways to create a chase-free home. “It’s important to teach a dog impulse control, or the ability to think before they act,” says Dr. Yin. “You teach them they can get what they want, but they have to go to you first.” She recommends starting with impulse control exercises.

“Start by teaching the dog to automatically sit for something they want,” Dr. Yin suggests. “Reinforce the sit position by asking the dog to sit and doling out food rewards for remaining in a sit.”

Teach Your Dog to Resist the Chase

Once your dog has mastered the sit, Dr. Yin suggests that you teach him to resist chasing the cat by mimicking her movements. “You’ll start by standing stationary, then suddenly moving backward in a straight line fast enough for your dog to trot quickly after you,” she says. “Then you’ll suddenly stop and reward your dog when he automatically sits in front of you. Moving back and away from the dog lets the canine understand the required behavior is to follow, and it makes the scenario interesting and fun for the dog.” This is high-energy work; in order for the training to be successful, it’s essential that you be as exciting and engaging as the running cat.

“Begin by rewarding the dog for sitting automatically. Treat for the initial sit and then randomly treat one or two more times while the dog is still sitting and looking at you before swiftly moving off in another direction — either backward or to the side.” Your dog should follow you as you move away; as soon as you stop, he should sit. Immediately reward the sit with a treat. “The game becomes ‘follow me, then hurry up and sit,’” says Dr. Yin. “It’s like a game of red light, green light.”

Add the Cat to the Training

“Once the dog understands the game and thinks focusing on you is fun,” says Dr. Yin, “the distraction of a cat can be added.” She recommends starting with the cat close enough to be noticed, but far enough away that the dog remains engaged with you. Dr. Yin says to keep in mind, too, that a cat who is playing will be much more distracting than a cat who is lying still.

She also warns that you will need to keep moving quickly to hold your dog’s attention. “Avoid being slow and predictable or the dog will start to divide attention between the cat and you,” says Dr. Yin.