Home ›
Our Pet Experts ›
Dr. Patty Khuly ›
Can You Be Sure Your Pet's Not in Pain?

Can You Be Sure Your Pet's Not in Pain? 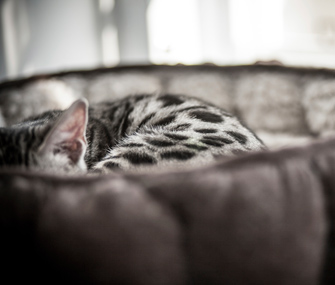 Thinkstock
Loss of social interaction, changes in grooming and restless pacing are just a few signs of pain.

If your pet were in pain, would you know? If you’re like most of my clients, you’d say, “Absolutely!” But studies show that pet owners — and even veterinarians — aren’t always good at detecting discomfort in dogs and cats. What’s more, my experience confirms it. It’s true. Most of my clients seem to assume their pet’s outward calm (or, in some cases, their persistent exuberance) is a sure sign of painlessness. But we’ve learned this isn’t necessarily so.

Over the past couple of decades, veterinary medicine has made great strides in anesthesia and pain control. In large part, this has come about as the result of the recognition that those who can’t communicate with us and don’t necessarily behave as we do may still be feeling the very same pain we dounder similar circumstances.

The most notable example of this oh-so-obvious leap in our understanding of other creatures came, surprisingly, from lessons learned in human medicine. Turns out that as recently as the mid-’80s we used to assume that human infants didn’t feel pain the same way we do.

Indeed, it was only when studies demonstrated an increase in survival rates among infants who received anesthesia and pain control during and after surgery that we came to understand the egregious consequences of our misperception: Our babies were literally dying of pain.

Since then, pain-scoring systems have been devised, modified and continually refined to help us better identify not just pain in infants, but also in pets. We’re not so different after all. In this, in particular, it seems we’re quite alike.

What Gets Lost in Translation

But there’s still the philosophical question to grapple with:While pets can't verbalize when they're in pain, they have other ways of showing it. But can we, with our human limitations and biases, ever correctly interpret what we see?

It’s true that we veterinarians have a tough job of determining how best to assess a patient’s pain, even with our fancy-schmancy scoring systems adapted from human pediatrics. After all, so much of it is subjective.

What's more, all animals are given to hiding their pain and distress to some degree. This is an effective evolutionary adaptation designed to help them avoid predators when they’re sick or injured. Even our pets, divorced from their wild cousins though they’ve been, have never lost that natural skill, despite their many thousands of years of domestication.