Home ›
Our Pet Experts ›
Kristen Seymour ›
Can You Really Meditate With Your Dog?

Can You Really Meditate With Your Dog? 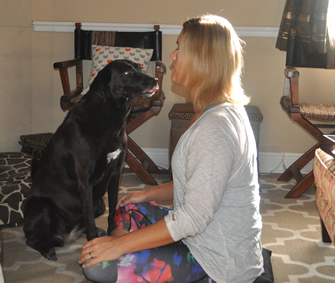 Credit: Jared Seymour
Sometimes Rudi the Lab mix settles right down, but sometimes she needs to get a closer look before she does.

My dogs are not known for being particularly calm. Rudi, my 7-year-old Lab mix, has mellowed a bit as she's aged, but she's still got plenty of energy. And Hollie, my 5-year-old hound mix, is always a bit high-strung, even with regular exercise and plenty of attention. They're wonderful dogs and I love them with all of my heart, but I don't think most people would call them peaceful or particularly composed. Fun and unpredictable, yes. Tranquil? Nope.

About a year ago, I realized that I, too, am a bit high-strung, often flying from an early swim or run to morning meetings to scrambling to meet deadlines without much of a break (except to refill my coffee, of course). And I get regular exercise and plenty of attention as well. I realized that I needed to do something about it. I began practicing meditation at home, starting out by following Oprah & Deepak's 21-Day Meditation Experience,which takes about 20 minutes a day.

I didn't exactly make it a daily practice, at least not right away, but I read a few books, downloaded a few apps on my phone, and checked out some DVDs, and what I found is that some days, a 30-minute guided or moving meditation felt right, while on other days, sitting alone with my thoughts for 15 minutes in silence or with soft instrumental music was just what I needed. But it took awhile before I was comfortable doing any of this.

As just about any Type A person will tell you, this is not an easy transition under the best of circumstances, and, at first, the dogs (and my cat, Trixie) were not helpful. At all. In fact, it became a bit of a joke. The first few minutes would be spent shushing my dogs as they took the opportunity to play — loudly — at my feet. Then, once they would stop that, they'd take turns sniffing various parts of me, then licking my hands, feet and, more often than not, face. And if they finally settled down? The cat would come over to make biscuits. Every. Single. Time.

Still, over the next few months, I continued to meditate in the living room, giving all animals free access to come and go. If they approached me in a riled-up state as I began to settle in, I might give them a quick, soothing snuggle before focusing on that day's meditation. I'm not sure why I didn't put them in another room — I guess I liked the company, even if they were rather disruptive. But whether they were jumping around on the other side of the couch or hanging out on the dog bed, I pretty much just did my thing.

And, believe it or not, they began to join in. 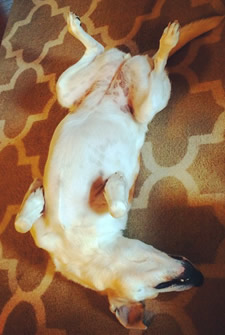 Now, don't get me wrong. I don't think for a second that Rudi is dedicating time to opening her heart chakra, and Hollie is definitely not repeating a compassion mantra. But, more often than not, within moments of my settling into my space and closing my eyes, both dogs—and sometimes even the cat — find their way over to spots very close to me and sit or lie down. Calmly. Quietly. Peacefully. I never force them to stay or bribe them in any way, but, unless something else excites them(like, you know, the UPS guy coming to the door), they almost always stay that way until I'm finished and standing. Sometimes, they even remain in their relaxed states long after I'm done.

I've found that, on the days when I'm joined by both dogs for 10 or 20 minutes, I feel even more centered and happy, and, it turns out, there's a reason for that. Danielle Mika Nagel, director of studio development at Chopra Yoga, says, "By meditating with your partner, you connect with each other on a deeper, more spiritual level."

Sure, Nagel is referring to a human partner, but by sharing that space and energy with my dogs, isn't it possible I'm experiencing a similar connection?

Dr. Wailani Sung, board-certified veterinary behaviorist, might not put it that way, but she agrees that it's a good practice for everyone involved.

"When I teach dogs to sit, I wait until their ears are perked forward, eyes are focused on me and their mouths are closed. We want the mouth closed because then they will need to take deeper breaths through their nose. When they take deep breaths through their nose, their breathing rate slows down, which corresponds with heart rate. When the heart rate slows down, then blood pressure lowers and muscles relax. So taking deep breaths benefits dogs just like it benefits a person.

"Since you have been doing meditation, your dogs have learned to do it with you. When you take deep breaths and relax, your body postures relax. Dogs read human body language a lot better than we read their body language. So if you have had multiple meditation sessions, they have learned that this is the time Mom is going to sit still and relax. They have learned from previous experience what is about to happen next and then they start to slowly relax. The more often you practice a behavior, the easier it is to perform, just like a habit."

Aside from the fact that meditating with my dogs makes me happy and gives them an opportunity to spend some nice, relaxed time with me, there are practical applications, too.

"Both owners and dogs become relaxed [during meditation], and the owners have a good way of settling their dogs down if they appear anxious, upset, worried or overly excited. You can go through the same routine at anytime of the day and I bet you, your dogs will settle in right next to you," Dr. Sung says. So, the next time a big thunderstorm hits, you'd better believe I'll pull out my pillow and find a nice, long, guided meditation to follow.

But, at the end of the day, whether my dogs get any sort of deeper connection out of this, Dr. Sung says it best: "Obviously they enjoy just being near you."


And that's enough for me to feel at peace.