Home ›
Our Pet Experts ›
Dr. Tony Buffington ›
Can't We All Just Get Along? Recognizing and Resolving Cat Conflict

Can't We All Just Get Along? Recognizing and Resolving Cat Conflict 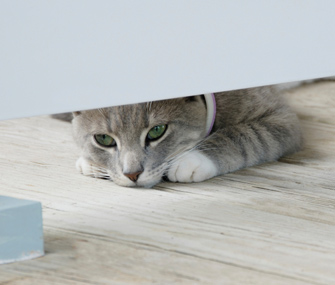 The average cat-owning household has at least two cats, some many more. And while most cats seem to get along fine, they can react quickly when they feel threatened. A more assertive cat might chase another cat from or silently block access to a food bowl or litter pan; a less assertive cat might spend hours hiding or even become sick. In fact, conflict is a more common reason for health problems in multiple-indoor-cat households than some cat owners might realize. In cases of extreme conflict, the chronic stress of threat might cause a cat to vomit hair or food, avoid the litter pan or start missing meals.

Our domestic pet cats evolved as solitary hunters of small prey, competing with other cats for food in common hunting grounds. The social behaviors among cats that emerged in this environment include reducing conflict by avoiding contact rather than by social interaction. This is different from how humans and dogs evolved. Because of this heritage, many cats prefer to have their own separate food and water sources, litterboxes and resting areas to avoid competition and unwanted interactions with other cats. Interestingly, unrelated cats who live together in groups appear to spend even less time interacting with each other than related cats do (which may argue for adopting littermates when you can if you seek optimal feline harmony). All of this suggests that conflict can be avoided by providing an enriched environment with an abundance of resources distributed throughout the house so there is no need for anyone to fight over anything.

When Does Conflict Occur?

Conflict among cats can develop when their status or resource access is challenged by other animals (including humans) in the home or by outside cats. Humans unknowingly contribute to conflict by yelling or throwing things or by favoring one cat over another. Conflict between cats can be open or silent (read: subtle), but with a little practice, you can recognize the signs so you can find out if this is a problem for your cats. Signs of open conflict are easier to recognize. In this situation, the cats may stalk each other, hiss and turn sideways with legs straight and hair standing up to make themselves look larger. If neither cat backs down, these displays may increase to swatting, fighting and biting.

Silent conflict may be present when one of the cats feels so threatened that it spends more and more time away from the family, stays in areas of the house that others do not use or tries to interact with family members only when the other cat is elsewhere. This can occur when a more assertive cat blocks access to essential resources such as food, water or litterbox. Conflict can be so subtle that a human might not even notice it. For example, a cat who seemingly peacefully but routinely moves away from a food dish when another cat approaches it may be exhibiting subtle signs of cat-on-cat aggression. Therefore, if you notice your cat becoming more and more reclusive, this may be the sign of a problem.

Sometimes, open conflict can develop when (particularly unrelated) cats who have gotten along wonderfully as kittens become adults and start to take some control of their territory. The cats involved in the conflict may never be “best friends” again, but they usually can live together without showing signs of conflict or conflict-related sickness.