Home ›
Our Pet Experts ›
Cat Can't Stop Itching? It May Be Food Allergies

Cat Can't Stop Itching? It May Be Food Allergies 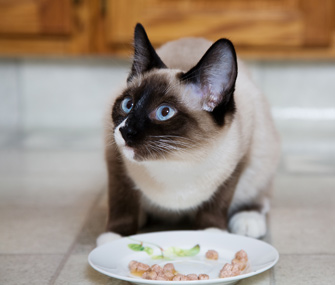 Thinkstock
Because food allergies usually take time to develop, most cats have been eating the food they become allergic to for years before signs appear.

Is your cat always scratching? Does he have scabs around his face and neck? Does he lick his paws excessively? Does he have recurrent ear infections? Although several medical conditions can cause these things, a food allergy is on the list of possibilities. Although not as common in cats as they seem to be in dogs, food allergies are implicated in many cases of itching in cats.

Your cat needn't have recently switched to a new diet in order to be allergic to his food. In fact, the opposite is true. Because food allergies usually take time to develop, most cats have been eating the food they become allergic to for months or years before signs appear. Although the process is not entirely understood, sensitization to a particular component in food involves an antibody response that begins in the intestinal tract. Although this sensitivity usually takes time to develop, food allergies can first appear in cats as young as 5 months of age. They can also appear in cats as old as 12 years, although most first appear between 2 and 6 years of age.

In general, the food components that are most often associated with food allergies are the most common ones in cat foods — in part simply because these are the food components cats are exposed to the most. They include beef, lamb, seafood, corn, soy, dairy products, wheat, chicken, eggs and pork.

It's often hard to decide if a cat's itching is caused by a food allergy as opposed to an inhalant allergy or some other medical problem. A cat who itches throughout the entire year or a cat who does not respond to steroid treatment is more likely to have a foodallergythan an inhalant allergy. In addition, other medical conditions, such as sarcoptic mange, ear mites and flea allergies, must be ruled out, as they can sometimes be confused with a food allergy.

The Challenges of Food Trials

At this time, many veterinarians and dermatologists say that the most reliable test for food allergies is a food trial, in which the cat is fed a source of proteins and carbohydrates he has never before been fed, and eats only this diet for a minimum of 12 weeks. Lamb and rice diets were at one time touted as "hypoallergenic," but their merit was due to the fact that lamb was rarely fed to pets in the United States at that time. So unless your cat has never eaten lamb, it's a poor choice. Instead, food trial diet foods are usually made from sources your cat almost certainly has never eaten, such as venison, duck or rabbit.

Hydrolyzed protein diets are also used in food trials. In these foods, the proteins are broken down into very small molecular sizes that don't elicit an allergic response. When on the food trial, it's imperative that the cat doesn't eat anything not specifically part of the diet. That means no flavored chewable medications, no chewies, no flavored toothpastes, no flavored toys, no stolen bites from the other cat's bowl, no gravy from your sticky fingers, not even kitty grass! For variety, you can slice the canned variety of the trial food and bake it to make crunchy kibbles. If your cat does sneak an illicit snack, note the date and what the food was. This will be important if he continues to have allergic responses.

Once the trial period is over (and the itching has hopefully resolved), the cat is allowed to eat the original diet to see if the allergic reaction returns. Alternatively, components of the original diet can be introduced back to the cat one by one until one elicits an allergic reaction. This is repeated until all the diet components that cause the reaction are identified.

You may need to keep your cat on a special diet for the rest of his life in order to avoid certain food types. Such diets are available from your veterinarian, or you can make a homemade diet using recipes provided by your veterinarian.