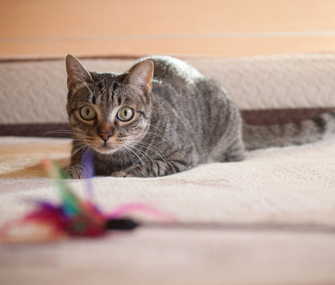 Thinkstock
Your cat's body language can provide insight into his emotional state.

You've found a cat trainer you like and you're excited to be working with her — but then she recommends clicker training or variable reinforcement or redirection and you have no idea what she's talking about. Trainer Mikkel Becker can help: She's defined some of the most commonly used cat training terms, so you can communicate successfully with your trainer and help teach your cat to be a well-mannered feline.

Body language: Physical postures and movements used by felines to communicate with other animals and people. Body language — often in combination with vocalizations like meows, growls, hisses or chirps — can provide insight into a feline’s emotional state or intent in a specific situation.

Click: The action of using a marker (most often a clicker) to pinpoint a desired behavior. May also be used to describe the sound the clicker makes.

Clicker training: A form of positive reinforcement training that uses a signal, most commonly a clicker, to pinpoint correct behavior. The signal is immediately followed by a desirable reward, such as a treat, a toy or an opportunity to play. The signal helps the cat identify which behavior is earning her the reward.

Conflicted: When a cat simultaneously wants to do something and is afraid to do it. For example, a cat can be conflicted when approaching someone new: She wants to approach to smell and investigate but is afraid of the person reaching his or her hands out or bending over to pet her.

Counter conditioning: The process of changing a cat’s emotional reaction to a situation from negative to positive. This is done by gradually exposing the the cat to a situation in a way that does not upset her while pairing the situation with a desirable reward. The goal is to teach the cat to associate the situation with something positive. An example of this type of scenario is teaching a cat that a person coming into the house is something to get excited about rather than be afraid of. Through counter conditioning, the cat can be taught that a new person coming into the house is the signal for a treat, rather than a reason to run and hide.

Criteria: The standard by which a pet owner judges a behavior or the standard used to decide which behavior is acceptable and which is unacceptable. Criteria can be adjusted as needed during training in order to enable the cat to successfully learn the correct behavior.

Cue: Signal given to a cat to elicit a desired behavior. “Cue” and “command” are traditionally synonymous, but the word “command” is not commonly used in reward-based training, as it has a connotation of using force to make a cat do something. “Cue” is most often used to refer to a training situation where a cat is asked to perform a behavior and is rewarded for her success.